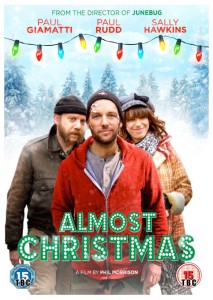 Almost Christmas is, in almost every way, about Christmas.  It’s about redemption and second chances, family and love, and a father wanting to re-connect with his daughter by fulfilling her heart’s desire by buying her a piano.  But Almost Christmas is set in the real world, not in the sentimental, powdered snow world of Christmas TV movies; and in the real world things aren’t quite so clear cut, and things don’t always work out as you’d expect.

Paul Giammati comes out of prison ready to try ad pick up with his ex-wife, and, at the very least his daughter, with whom he wants to try and make up for lost time.  Unfortunately the ex-wife has put a slight hitch in his plans having told their daughter that he had died rather than gone to prison for 4 years.  Both mother and daughter were now waiting for her boyfriend’s divorce to be finalised so that they can be married and become a proper family for the first time since the father’s “death”.  To add insult to injury, we now learn that the boyfriend is in fact, Giammati’s old friend, partner in crime, and – from his point of view anyway – the reason he was caught and imprisoned (Rudd).  This situation has left Giamati’s character homeless, family-less and in this remote area of Quebec, jobless too; so he persuades Rudd’s character to take him along on a trip to New York to sell Christmas trees and make some money to buy his daughter a gift she’ll never forget.

The pair spend a month in New York, eking out a living and getting into a series of strange and sometimes random situations. It is here that you learn what each man is truly made of, and the potential that lies within each.  It’s blackly funny and extremely low key and free of sentimentality. What really makes it work though is the performances (Hawkins’ Olga is just wonderful) which carry it through in a way that is sometimes reminiscent of a single set play.

It may not end how you want it to- but it does end how it probably should, and that’s ok too.  Don’t watch this to feel Christmassy or to cheer you up when you’ve burned the turkey, but as a one or two time watch, it’s definitely worth the price of admission. Different and dark with great performances. Emma Mass Movement