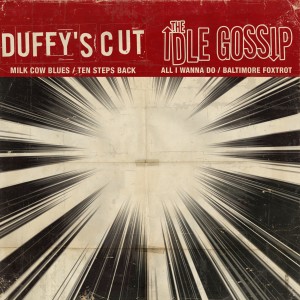 These two relatively new bands from the US of A are both like kids in a musical toyshop. They have the weapons of their choice – guitars, bass, drums, vocals and organ – and have been given free rein to explore musical heritages past and present and grab whatever takes their fancy. Rooted in the punk rock spirit Duffy’s Cut are happy to delve into the soulful roots of guitar rock music, mixing up the sounds of the sixties and seventies but dropping a contemporary style. Both their songs are bouncing tunes that are sure to be dancefloor fillers. They have taken the sound of their debut release forward and moved several leagues up with these killer tunes. The Idle Gossip are worthy musical partners as they take a similar approach, throwing all manner of genres into their musical pot whilst ensuring the result is a knockout cocktail. Blending the raw melodies of someone like the 101’ers with the punk attitude of the Ruts but adding a soulful twist similar to the 45 Adapters, they bang out two tunes that are the perfect match to the Philadelphia boys on the other side of the disc. Tom Chapman