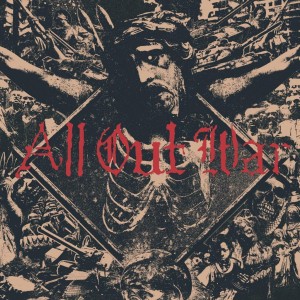 All Out War – Dying Gods CD (Organized Crime)
The hardcore/metal stalwarts return again with another collection of punishing metallic hostility. So… five brand new tracks and two brutal covers on offer here – which include a nice spin on Sepultura’s ‘Arise’. All Out War still vocally air their opinions strongly and ‘Servants To The Obsolete’ is a brutal reminder of their shear guttural strength. Reminiscing very much of the ‘For Those Who Were Crucified’ era this new EP positions itself as potentially the bands best record to date. It’s heavy, brutal, and executed via a decent pace, it spits in the face of what now-a-days is labelled as metalcore. Always standing head and shoulders above bands like Merauder, Fury Of Five and Earth Crisis, this New York based five-piece is a triumphant monster, a band that deserve a place in the history of brutal music. Mark Freebase

All Out War – Dying Gods (Organized Crime)
With every record All Out War takes us deeper into their sonic nightmare. The metal is of such density chemists should invent another element for it. And the lyrics hit harder with every word of anger and despair uttered. With every single song on ‘Dying Gods’ as much as on previous releases, I keep on wondering if there’s more bile to be spat at our god­forsaken planet? All Out War just keep on digging deeper, never afraid to hold that unwanted mirror in front of a decadent, ignorant population only out to consume more and more. Martijn Welzen