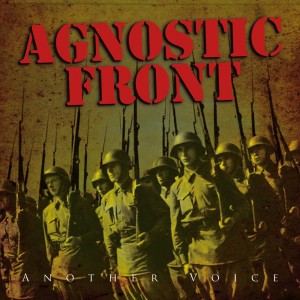 Agnostic Front – Another Voice (Metal Mind)
In between the boundaries of what one could call NYHC Agnostic Front has always been a chameleon. The roots were always visible, but the band has always been able to write street punk songs just as easily as metallic cross­over songs. I also think that the band chose the more punk route when on Epitaph Records (1998­-2001) and were walking the metal path when they released their first album on Nuclear Blast in 2004. Truth be said their new album ‘The American Dream Died’, is as hardcore as they come, which sort of breaks with the tradition. What Metal Mind is giving us is a reissue of the band’s Nuclear Blast debut, and whilst dripping with NYHC, all songs have a heavy metallic edge to them. Usually we also get bonus tracks with these limited reissues, but now it’s only the original album in all it’s glory. Just crazy to think ‘Another Voice’ is already 10 years old. A nice way to remember the record that started AF’s long stint with Nuclear Blast. Martijn Welzen