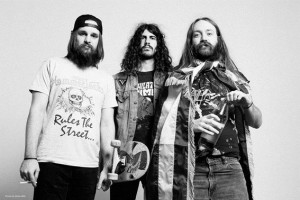 Venice Beach, California’s purveyors of Psychedelic Violence, The Shrine have joined forces with legendary metal and hard rock label, Century Media. The Dogtown triumvirate (guitarist/vocalist: Josh Landau, Court Murphy: bass, Jeff Murray: drums) has been spray painting the walls of rock’s collective (un) consciousness over the course of two critically much ballyhooed LP’s: 2012’s Primitive Blast and 2014’s Bless Off (both on the Tee-Pee label). Along the way, they won over the hearts and minds of rock, punk and hesher communities and received blessings from the likes of skate legends including Jeff Ho as well as music luminaries like Black Flag founder Chuck Dukowski.

“When we walked into Mike Gitter’s office and there was a giant framed photo of Dennis Hopper from Easy Rider next to a Stooges poster next to an original handbill from a Slayer/Venom gig, we knew this man and the company he keeps, Century Media, was more than good enough to butter our bread,” says Landau of The Shrine‘s new label home. “Listening to The Shrine is the sonic equivalent of rifling through old issues of Thrasher and Action Now Skateboarder with Charles Manson while blasting California Jam bootlegs and Black Flag’s My War,” says Century Media A&R man Mike Gitter. “They’re the resin scraped from several generations of no-bullshit American rock distilled into its purest essence. What they’ve accomplished on their own is nothing short of awesome. The Shrine‘s legend is only going to grow larger and louder.” Shortly after signing with Century Media, the members of The Shrine found themselves in the studio with legendary producer, Dave Jerden. Jerden is known for his landmark productions with the likes of Alice In Chains, Jane’s Addition, Social Distortion, but also having spent time working with a Frank Zappa, Herbie Hancock, Jerden discovered The Shrine while visiting the Timewarp Guitar shop in Venice where the band actually played its first show in 2009. “When I first heard The Shrine at the guitar shop, they were the best blend of punk, thrash and hard rock I’ve ever heard,” says Jerden. “I had to work with them. The record we’re making right now is an over-the-top, in-your face, rebirth-of-rock record!”

“When Dave walked into our garage and immediately began talking about Captain Beyond, I knew we had the right dude.” Landau says about meeting Jerden for the first time.
Having toured the globe exhaustively and gigging with everyone from heavy rock supremos, Graveyard to metallurgists like Municipal Waste to indie rockers, Dirty Fences, The Shrine will exit the studio and headline a tour of Japan in August. Shortly after that they will join with none other than Motörhead, Slayer, & Suicidal Tendencies on the 2015 Motorboat cruise on Sept 28-Oct 2. In addition, 2015 looks like a crushing year for The Shrine with dates throughout the world – including a European tour as direct support for Kadavar in November & December.