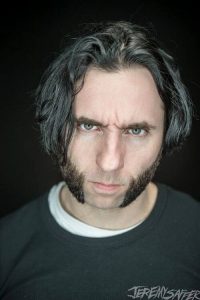 Alex Story first caught my attention when Doyle (the band) released their debut album Abominator in 2013. That album blew me away so much I listened to it approximately 150 times in a row before putting it down and searching out Alex’s work with his band Cancerslug. Once again I was drawn deeply into the music and have been a fan of Alex Story’s ever since. Right now we are waiting for the final album from CS entitled Symphony of Savagery and the second album from Doyle to be called As We Die. With all of the excitement around these two events we even get a bonus, an album from Alex Story and longtime girlfriend/bandmate Cassie Roya Baher. A Darker Shade of Love is full of sleazy blues rock in the vein of Dax Riggs’ post- Acid Bath solo work and Alex’s own acoustic music. While the end of Cancerslug is a tragedy, the future holds great promise for the king of sleazy rock and roll.

MM:  What led to the decision to lay Cancerslug to rest?

Alex Story:  Everything dies. I always liked that idea of a great life ending at the height of its power. However, I also like the idea of metamorphosis or a great transformation. I look at the first phase of Cancerslug as finally being dead, by the completion of The Sadist Trilogy. We summed up the first phase of Cancerslug with the compilation album The Unkindest Cut. But The Sadist Trilogy began with Seasons of Sickness and continued with Sassy for Satan and now we complete it with Symphony of Savagery. I look at this new phase of the band like a great film remake. But not one of those lame remakes like most of the garbage that comes from a lack of fresh ideas… Instead, I see this trilogy as a reimagining of Cancerslug featuring every aspect of the original band, but improved, mutated, and grown into a new beast!

MM: How have the members of the Slugcult responded to the announcement of CS’s demise?

Alex Story: I can’t really speak for them all. But we’ve noticed a cross between curiosity, anger and fear…And this is the response I always want from my art.

MM:  Do you think that you will ever revisit this period of your musical development?

Alex Story: All of my art seems to be cyclical, it’s just a spiral of ideas. The further it stretches out the more it rotates around the same path.

MM:  Would you be likely to extend Cancerslug’s lifespan if you had the chance to open for the much-speculated (but not confirmed) reunited Misfits on a tour?

Alex Story:  I’d love to open for them. I’m Super excited as a fan. And Doyle being my dear friend, of course I’m crazy happy for him and wish him well on this! But Cancerslug will evolve into its next phase regardless of what happens. Life death and rebirth are inevitable at this point.

MM:  Your early musical influences are well-documented in other interviews but are there any new bands that you find have influenced your music?

Alex Story:  Not a lot of new stuff. But I find myself more open to things I use to write off or laugh at. These days most bands are so lame that things I use to think were lame seem cooler by comparison.

MM:  How do you approach Cancerslug music differently than you do the music you create with Doyle in his self-titled band?

Alex Story: With Cancerslug I write everything. From concept to the finished recording, it’s all by my design. So it is complete freedom to me. However I do try to write towards the strengths of the band members I play with. I write riffs or breakdowns in songs that showcase the talents of whatever band members were in the band when I wrote those songs. In Doyle, it is a collaboration. Doyle writes the music and I write the lyrics and vocal melodies. It’s two different styles too. Cancerslug is punk based, but the style jumps all over many genres. With Doyle, we wanted it to be aspects of Cancerslug and The Misfits without sounding like either one. We decided to make a thrash metal crossover punk and hardcore band, with dark themes and doomy stoner rock style breakdowns. 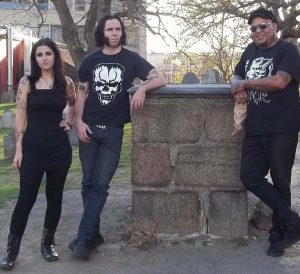 MM: In your lyrics you have constant references to drug use yet your physical appearance leads me to believe that you take good care of your health. Are you actually a user of recreational chemicals or do you put all of that into your songs in order to purge those urges?

Alex Story: I try to balance the good with the bad. My songs are autobiographical although I hide some things in metaphor and behind dark comedy. I’ve grown up very much on my own and used hard drugs on and off since I was fourteen years old. It’s no secret that I’ve spent most of my life using heroin, coke, morphine, amphetamines and various opiates. But I’ve never been a “fiend”. That is to say, I don’t have an addictive personality. I’m the type that will use for three months then stop cold turkey and workout and eat right for a month. And I’m not saying that is healthy or a good lifestyle. But it’s my lifestyle and has been my whole life. I’m no role model. I’m a hobo artist. At best, maybe a poet, at worst a cautionary tale. I write songs about what I know and what I’m interested in. I have an odd sense of humor and throw that in there too. But this is my life. For better or worse it’s mine.

MM: The first disc of Cancerslug’s farewell to its fans, Sassy For Satan, already released, a new Doyle album on the horizon and the second and final disc of CS’s goodbye promised, it seems like you have a full schedule. What other surprises do your fans have to look forward to in the coming months?

Alex Story: If I told ya now it wouldn’t be a surprise!

MM:  Sassy For Satan is proof that you truly appreciate your fans. This is the best produced CS album I’ve ever heard and the Slugs seem to love it. What have the reviews been like from sources other than your already loyal fanbase?

Alex Story:  Mike, Cassie, and myself…. We knew we wanted to end the first phase of the band with style. Since the early days of the band were known for low quality demo recordings, we wanted the best production we could find. So after looking around we found a great studio and recorded Seasons of Sickness. It was the best recording quality (and many have said the best album) of all the Cancerslug catalogue. With Seasons… finished we wanted a great companion piece to end on. So we came up with the idea for an album of half rock/bluesy tunes and half heavy sinister dark violently aggressive music. The idea was for the album Hung Like Jesus but once we began working on it we realized that it was too big of a project for just one record so we split up the songs. The lighter stuff or fluff went on Sassy for Satan and we saved the real brutal shit for Symphony of Savagery and with that, The Sadist Trilogy was born.

MM:  Can you give us any hints as to what to expect from the new Doyle album, As We Die?

Alex Story:  If you enjoyed Abominator then As We Die is everything good about that album but done better. Better drummer. Better writing. Better recording. All better. And it explores more styles. A lot of heavy stuff still. But more weird gothic crazy cool grooves.

MM: Will there be a tour to support the release of As We Die?

Alex Story:  We are working on that now.

MM:  Now that you’ve achieved so many of your musical goals, including your work with Doyle Wolfgang von Frankenstein, what’s next for you to work toward? What keeps you stimulated and creative?

Alex Story:  I just try to stay busy Jim. I really love art. And I love the countless ways we as human beings can express ourselves. Every extension of my voice that I can use I will. 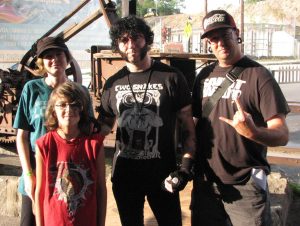