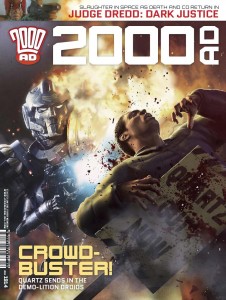 2000 AD: Prog 1914 (2000 AD / Rebellion)
It’s hard to believe that it was 37 years ago almost to the day that my thrill power addiction started. Prog 93 had a wonderfully lurid FLESH book 2 cover, featuring a bunch of terrified submerged salty seadogs being approached by a huge green prehistoric arthropods and the caption “NOOO- PLEASE LET ME DROWN BEFORE THE GIANT SCORPIONS GET TO ME!”. My Dad bought it for me to keep me quiet on the long car journey home from Manchester, and it did the job a treat, if you count occasional exclamations of “DROKK” and “STOMM” as quiet. This was a huge step up from the Star wars comics and funnies like Buster, Whoopee! and the Beano that were the staple fair of my impressionable young mind back then.

Harder to believe too that back then a brief scan of newsagent shelves  would hold a plentiful bounty of dozens of all original all British anthology titles in a huge variety of genres, all created by indigenous British talent. Whilst many things have improved since then, it is a veritable tragedy that the UK comic industry- which turned out world class, industry changing talent for decades has now atrophied and dwindled to virtually nothing. Just like the UK, hand in hand and riffing back and forth with the USA once bubbled over with urgent, challenging, vibrant new music and fashion, so was it with four colour funnies. Much has been said about the decline of contemporary music since in the last few decades, but nowhere near enough has been made of the near extinction of our native comic industry.

But if one comic had to survive- then thank Grud it was this one. Along with the Beano, 2000AD remains the battle scarred, lonely but noble and proud remnant of a more creative era- a time when it was the showcase for Britain’s finest established talent and a showcase and training ground for the most promising of newcomers- Many of whom are now established as the very top names worldwide.

This prog’s line up consists of light hearted mayhem from obscure Grant Morrison character Ulysses Sweet is a whole megaton of fun, and Dredd braces up to meet his arch nemesis Judge Death again, this time in a slow boiling , tension building thriller set in a space colony. Sumptuous art by Gregg Staples captures the mood nicely with one minor niggle- It looks very much like the judges are drawn in to resemble the cosplay judges doing the rounds in the UK convention circuit- a nice nod to the prog’s uberfans, and great for background characters, but Judge Anderson looks far too young here for a character in her 50’s. A very minor complaint for sure, but one of JD’s unique points is that the cast age in real time. Anderson was originally based on Debbie Harry who has aged less well, and certainly doesn’t look like a teenager.

Orlok and Savage – both characters created in the comic’s cold war roots are back, still not gripped by Orlok – he was killed off a while ago and I see little need for his return, but the story and are engaging enough- Toothy nearly always has a story I don’t engage with and this is way above the regular standard of those. Savage is a stand out – A character phased out in the 70’s and considered ridiculous until his resurrection a decade ago- when the original “Volg” invasion story became an analogue for the war on terror and bereaved shotgun wielding maniac with a hate on for the invading forces became a cypher for the whole terrorist/freedom fighter question . This is undoubtedly one of the high points of Pat Mills’s illustrious career- creating 2000ad itself being yet another crowning achievement , and Savage has come a long way since his noughties resurrection. Here Mills is universe building- linking Savage to Ro-Busters which in turn leads through Dredd, Strontium Dog, A.B.C. Warriors and Nemesis, weaving a wild tapestry from the comic’s rich 40 year history. This is merely a thread in the story though, which is Mills at his political, thrilling and thought provoking best.

Rounding out the thrill smorgasbord nicely is The Order, by old newcomer Kek-W and British vet John Burns, a delightfully weird mediaeval romp featuring an enigmatic robot knight’s head accompanying a lady warrior and a bunch of pensionable knights through all manner of high strangeness. Hugely enjoyable and, I hope, a candidate for a long running series. It’s the one entirely new thrill in the line-up – proving that Tharg’s mighty organ does not trade solely on its past glories.  All in all Prog 1914 is an elegant start to a new year of thrills, and promises that the best is yet to come for an institution and national treasure that sees its 2000th issue next year, and serves as a weekly reminder that once upon a time, Britannia really did rule the medium. Don Doomcock