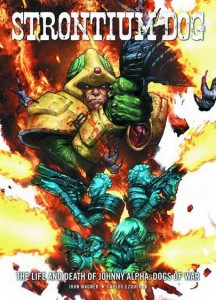 Strontium Dog: Dogs Of War – John Wagner & Carlos Ezquerra (2000AD / Rebellion)
Our transatlantic cousins have a habit of “killing off” their big name characters on  a regular basis- usually too much free publicity and press fanfare. I’ve seen Batman die at least twice in my comic reading days, Superman has had more rebirths and reboots than I would care to count and I’ve completely lost track of the whole Phoenix/Jean grey thing at this point- what the fucking fuck is going on with that these days?? Answers on a postcard to: Who gives a flying fuck c/o your ever lovin’ Mass Movement Magazine.

Not so with 2000AD, where dead means dead, and man do I miss arch deviant and personal role model Nemesis the Warlock. As always there is an exception that proves the rule , and in the case of the Galaxy’s greatest comic, one of their finest characters and sterling stalwarts: Johnny Alpha – the 22nd centuries most dangerous search and destroy agent/mutant bounty hunter,  nicknamed Strontium dogs by the norms who detest them was resurrected by a surprisingly clever and elegant turn of revisionist history.

A strong  theme since day one of Strontium Dog is the masses fear of those different to them and the subsequent oppression and persecution by the majority. In this case the mutant population- created by man in the fallout of nuclear folly and then rejected and neglected by those responsible for their sorry fate. The mutants are perceived by the norms to be as mentally twisted as their bodies are, and their subsequent ghettoization and even ethnic cleansing is justified- to the clean bodied they are an abomination.

Of course the reverse is true, and whilst the elite ruling class of norms contrive to eradicate them, they do so with sound bodies but minds diseased with fear, prejudice and hatred. The parallels throughout history which still plague mankind into the 21st century surely do not need pointing out.

And it is this recurring  theme which is the lifeblood of Dogs of War- Once again the norms have broken the uneasy peace with the mutants and this time have covertly sterilised the entire mutant population-The bigots behind this- politicians and corporate men masquerading behind a charitable cause see this as a humane end to the pollution of the gene-pool , but it is effectively genocide

And so the second mutant war kicks off. It cannot be won. All that is left is bloody vengeance. Johnny returns to his role as wartime mutant leader, rebel guerrilla , freedom fighter – a war that he is fought in since he was a boy. A war that has now been irrevocably lost.
There have always been sympathisers to the mutant cause in previous tales, but not this time- A final solution is at hand and the voice of reason falls silent.  2000AD has through the years often found it’s voice clearest when a tory government is at Britain’s reins, and it seems the callous injustice and hopelessness  here, the lack of dissenting voices  reflects the state of Cameron’s Britain- An underclass “always grubbing for a roof over their heads and food on their plates” seems all too familiar .

It is hard to tell where the saga will go from here, it seems to have written itself into a corner, with some grim ending not far down the line, and a return to semi-humorous yarns of tracking down some bizarre intergalactic bounty would seem a little passé after this. One thing is certain-Wagner and Ezquerra the  original creators of Strontium Dog waaaaay back in 1978 – are still going strong 5 decades into their storytelling partnership-  unprecedented and unrivalled in the medium. Crisp, clean , flawlessly paced, effortlessly economical dialogue and gripping stories and situations told by creators who have an intimate knowledge of their characters second to none. This particular story is made stronger still by returning them to their roots- war comics where their partnership was first formed.

It seems that the saga is drawing to a conclusion, but with these two at the helm, one can never be sure where it will lead, but sure as Hell, it will be worth waiting for. Don Doomcock