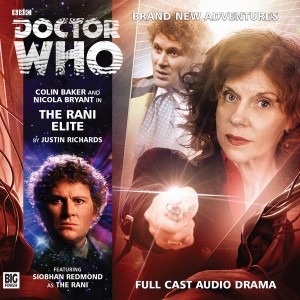 Doctor Who: The Rani Elite – Starring Colin Baker, Nicola Bryant, Siobhan Redmond, Andrew Bone, Becky Wright, Mike Noble & Charlie Morton & Written by Justin Richards – 2xCD / Download (Big Finish Productions)
Every hero needs a villain. A yin to their yang, a nemesis to battle, an adversary who torments and teases them with schemes of domination and destruction and pushes them far beyond their supposed limitations as the fight to subjugate their opponent and restore balance and rationality to their theatre of conflict. A good hero, one whose mythology and tales of daring do reach far and wide, has many such enemies, accrued in The Doctor’s case at least, almost entirely by accident and through circumstance, fiends who return time and time again to plague and torture our hero and even though they may cross paths with each other for decades, when they eventually come face to face, it always ends the same way: pain, suffering and struggle. And as the title of The Doctor’s latest adventure makes clear, this time it’s the turn of The Rani, and absence has most definitely not made the heart grow fonder, a sentiment that’s as true for the Rani as it is for The Doctor.

Having been invited to the CAGE (or the College of Advanced Galactic Education as it’s more commonly known) in order to receive an honorary degree, The Doctor (and Peri) soon realise that they’ve been hoodwinked by The Rani in order to further her own infernal experiments. Having played on, and used, The Doctor’s vanity against him to lure him to her web, The Rani’s single minded vision to control one of the fundamental ideas of causality and effect kicks into high gear as the age old foes prepare to face each other one more time. With students inexplicably changing, and not for the better, after being tested by a certain Professor and the Vice Chancellor of the University seemingly supporting the new “exam” regime, and with the halls of academia, quite literally, closing in around them, any hope that The Doctor had of taking centre stage and being awarded his degree in Moral Philosophy rest entirely on his ability to defeat The Rani. Which this time, is easier said than done.

‘The Rani Elite’ as well as returning the eponymous Gallifreyan scoundrel to the Whoniverse, also questions ideas of eternal youth, from both scientific and personal perspectives, and whether the price paid for it (in theory) is ever worth it, while postulating which is greater and in the long run, more useful, organic or artificial intelligence. Oh, and it’s also a smashing slice of classic Who drama, featuring as it does, an enticing, balanced plot that weaves in and out of itself, with seemingly casual events having a major effect on later developments (the structure of the story reflecting one of the main threads, that is the nature of Chaos Theory) and a note perfect cast. Siobhan Redmond’s cold, calculating and at times, almost unhinged, Rani is a marvellous foil for Colin Baker’s exuberant and delightfully eccentric Sixth Doctor, and the pair play off each perfectly, creating and crafting a delicious dynamic and twisted relationship that I hope (please, please, please make it so) we’ll see a lot more of in the future. The Rani’s back let the games begin… Tim Mass Movement