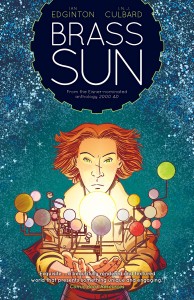 Brass Sun: The Wheel of Worlds – Ian Edginton & I.N.J. Culbard (2000 AD / Rebellion)
Fantastic worlds and alien cultures have always been a staple of Science Fiction; and since its humble beginnings, the myriad of species and societies that have risen and fallen in the annals of the genre is almost beyond measure. Which means that most life-long devotees of tales of strange galaxies and the beings who inhabit them have a tendency to imagine that we’ve seen it all before; that we’ve experienced so many variations of the constant theme that there’s nothing left to surprise us. And while we’re happy enough to seek literary sustenance in the familiar, we secretly yearn to stumble across something new, something extraordinary, something that will cause our nerve endings to tingle and our synapses to fire a little faster; something that will flood our minds with raw excitement, illusion and fresh insight, something that breathes new life into a much loved and trusted genre. And that’s exactly what ‘Brass Sun: The Wheel of Worlds’ does.

Set in a bizarre, clockwork solar system, ‘Brass Sun’ follows Wren, a young girl whose grandfather (knowing his time is short) starts her on a journey to help breathe new life into a dying sun. As her quest begins, she’s “helped” by the Holy Order – who control transit between the worlds – and told that she must find a set of keys if she is to successfully restart their star, then sent on her way in the company of a young brother from the order. Hers is a mission that takes her to places she never dreamed of and dangers she never she never thought possible; and along with Septimus (the Order’s initiate) she find herself immersed in unfamiliar worlds, facing deception, betrayal and trickery, fighting incredible robots, becoming involved in feudal, age old aristocratic wars, drifting among the heavens of gas giants, searching for a miraculous cure that heals all wounds and sickness and ending up on first name terms with the being that created all she holds dear. This is the stuff of which epics are made.

Taking inspiration from the works of Michael Moorcock, Alex Raymond and Larry Niven, Ian Edginton’s story adds a sprinkle or two of their ideas, themes and characters into his hugely original and breath-taking steam-punk Science-Fiction opus. It’s a tale that even the most jaded and cynical can find joy in; one brought to life by the pulp heavy, golden age artwork of I.N.J. Culbard, that burrows its way into your soul, digging its way in while whispering soothing, sweet fables of outlandish, exotic and curious adventure. ‘Brass Sun’ is a thing of incredible beauty and mind-bending invention, ingenuity and insight built around good-old fashioned story-telling at its finest. It is, in the words of Dave Bowman, “Something wonderful”… Tim Mass Movement