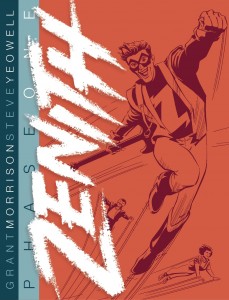 Zenith: Phase One – Grant Morrison & Steve Yeowell (2000 AD)
Since ‘Superman’ first appeared seventy six years ago, the concept of the super-hero has undergone a radical transformation, changing innumerable times, often beyond all recognition as audiences learned to cherish and embrace the anti-hero. Yet, no matter how much the characters are twisted around, flipped upside down and turned inside out, at the end of the day, that original spark, the core of who they are, the essence of what makes, and made, them a “hero” in the first place remains intact. It might be buried a little deeper and take a little longer to make its presence felt, but it’s still there. And that’s what makes Zenith, Grant Morrison’s me-generation poster boy and eighties consumerist wet dream, egomaniacal, pop-star with powers, a super-hero. Oh, he may be as far removed from the traditional model of a costumed vigilante as an axe is from surface-to-air missile, but he still possesses that innate quality that makes him leap into action to defend the weak and powerless, and his motivation may not be as pure and clean cut as his straight up and down, three squares a day, all for Queen and country predecessors, but at the end of the day, he gets the job done. And yes, he is spoiled, self-obsessed and a little narcissistic, but like the rest of us, he’s a product of his environment, and let’s be honest here folks, who among us hasn’t indulged in a little self-love, isn’t guilty of a little over-bearing arrogance and hasn’t at one time or another, believed themselves to be the absolute centre of the universe?

‘Phase One’, as you’ve probably surmised is where it all begins for our pop-star come super-hero, in an alternate history where super beings have been a reality since the Second World War, which saw the rise of the super soldier and the genetic program that enabled super-heroes to exist, and where said war was ended when America dropped an atomic bomb on Berlin. However, the more things change, the more they stay the same, and as our story of secret Nazi cults, Elder Gods, revived super-soldiers, and the war waged against them by aging, semi-retired super-heroes and Zenith in order to prevent Earth and humanity falling prey to twisted horrors from beyond time and space, takes place, the world, much like it always did, moves to the beat of Thatcher’s drum, as self-interest, greed and power act as the clarion call for the brightest, shining ‘heroes’ and those who believe in doing the right things for its sake, fall by the wayside. It’s a tale of monsters, both the Earth bound variety and those born multiple millennia ago in the heart of long dead stars, of wars long since thought finished, that in reality rage unseen that make up and feed the background ephemera and white noise that constitute existence for the nameless masses and it’s a tale of super-hero’s unlike any you’ve ever read, or will probably ever read again. Razor sharp, Morrison’s story also questions social structures and the way that values and ideas of society as a whole change with each successive generation, while resolutely sticking two fingers up to the political establishment, conformity and normality, and it also looks fantastic thanks to jaw-dropping (and at times mind bending) artwork of the mighty Steve Yeowell. Get ready to be blown away… Tim Mass Movement