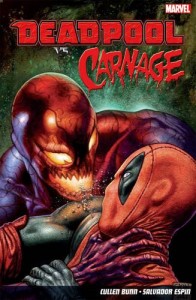 Deadpool Vs Carnage – Cullen Bunn & Salvador Espin (Marvel / Panini)
There is, as has been noted throughout history, a fine line separating genius and insanity, and both extract and demand a heavy price in return for their favours. It’s a price that has been repeatedly paid by Cletus Kasady while under the influence of the Carnage symbiote whose madness is matched only by their bloodlust, and while other would label them deranged and demented, they would beg to differ and in doing so, claim that they dwelt on the other side of the aforementioned line. Deadpool however, would have no such compunctions, knowing full well that he had been chewed up, swallowed digested and regurgitated in an endlessly repeating cycle by lunacy itself, and as such happily embraces his celebrated state of mind. So, what would happen if these two bastions of super-powered psychoses were to meet head on, each determined to take the other down for their own reasons? That boys and girls, is exactly the question that Cullen Bunn poses in ‘Deadpool Vs Carnage’ and the answer that’s gradually revealed throughout the course of the book is a darkly funny, thoroughly engrossing and highly entertaining guts and gore soaked story involving graphic and incredibly brutal violence, murder, death and destruction on a massive scale. All of which make it a must for any discerning fans pull list. And you’re discerning fan aren’t you? Of course you are; that’s why you’re reading this…

While the story itself isn’t exactly mired in complexity (the symbiote and Kasady are reunited, go on a killing spree which brings them into Deadpool’s crosshairs as he realises that it takes a whack job to track a nutcase and sets off after his chosen target with glorious and foolhardy abandon) the way in which it unfolds, the dialogue, characterisation and relationship that evolves between hunter and hunted (and the way in which their roles keep reversing and switching) combine to make it feel like it is, almost as if it’s being told on numerous different, and strangely compelling levels at once. Crammed with one liners and soaked in wonderfully detailed slaughter by the fevered pencils of Espin, Henderson and Jacinto, ‘Deadpool Vs Carnage’ is a barbarous, ferocious, frantically paced book that leaves you breathless, giddy with pleasure and desperate for more. The lunatics have taken over the asylum and I couldn’t be happier… Tim Mass Movement