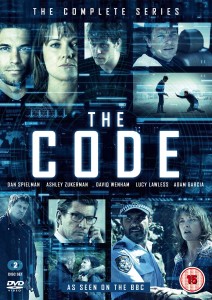 The Code (Arrow Films)
Sometimes, it’s the seemingly insignificant, unconnected things that cause the hitherto safe and protected world of the establishment to shudder on its axis. The domino effect powered by chaos theory with a touch of Murphy’s Law thrown in for good measure, has brought many a promising political, and influential business, career crashing down, and ‘The Code’ strips that process back to the bones, illustrating each and every tiny event that leads to the collapse of the big guns and allowing Mohammed to not only move the mountain, but shatter it into pieces when it refuses to move and get out of the way.

‘The Code’ is a powerful, slow-burn, character driven conspiracy thriller that explores the murky world of Australian politics, corporate secrets and the furtive, dirty world of cyber-crime and intelligence agencies. After receiving a tip off about a road accident and the resulting death of a teenage girl, Ned (an investigative journalist) begins to dig a little too deeply when the facts don’t add up and soon finds himself, together with his hacker brother Jesse (a high functioning Asperger’s sufferer), neck deep in an illicit high level cover-up involving major leaps forward in nuclear technology, betrayal, theft, covert schemes, international arms dealers and a mysterious set of files powerful enough to topple governments and alter the balance of world power forever. And as the floodgates slowly open, Ned and Jesse begin to drown under the weight of all of the small things and the deadly, and disastrous truth they drag in their wake, and when people start dying and the casualties, increase, the only thing that they can do is run before it finally catches up with them and everyone they care about.

Born from the Nordic noir tradition, ‘The Code’ combines the stark, empty loneliness of the Outback with the cold, efficiency of the corridors of power and those they house to create a brutal, uncompromising drama that doesn’t pull any of its punches or offer any sanctuary for its audience. It ensnares you, sucking you into the lives of its principal players, most of whom (just like most of us in the real world) are deeply fallible, possessing as many unlikeable as likeable elements, giving each of them an everyman quality which makes the interweaving plot threads and central story arc far more believable. ‘The Code’ tackles questions of corruption, ideology and belief, and paints a realistic portrait of their aftermath and the suffering and misery they cause as they taint and warp even the most studious and honourable men and women. At times uncomfortable and difficult to watch, but if you stand firm and stick with it, ‘The Code’ is nonetheless a rewarding and strangely uplifting experience that stay firmly rooted in your subconscious long after the final episode has ended. It’s always the little things… Tim Mass Movement