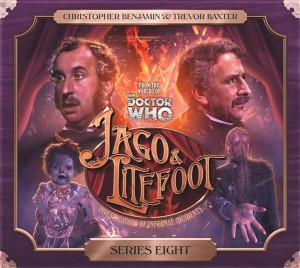 Jago & Litefoot: Series 8 – Starring Christopher Benjamin, Trevor Baxter, Lisa Bowerman, Conrad Asquith, Jenna Russell, Gus Brown, Cameron Blakely, Sarah Lark, Ian Burford, Andrew Greenough, Flaminia Cinque & Robert Whitelock & Written by James Goss, Andy Lane, Simon Barnard, Paul Morris & Justin Richards – 5xCD / Download (Big Finish Productions)
I say, series eight, already? Only seems like yesterday when it all began, you know, when that dashed peculiar fellow The Doctor and Miss Leela turned up to help put paid to that rum business with the disappearing girls and that bally strange Weng Chiang bounder. Lawks, where has the time gone? Up in smoke that’s where time has gone, while saving the Empire and protecting Queen and Country from numerous alien Johnnies, terrifying technologies and contemptible cads. That’s right sir, and quite correct madam, Messer’s Henry Gordon Jago and Professor George Litefoot have saved humanity more times than you’ve had hot dinners, and they’re not about to slow down or stop anytime soon. Not while there’s nefarious plots to be foiled and dastardly shenanigans to be halted, and if this latest set of harrowing and perilous adventures is anything to go by, then I’m pleased, and proud as punch, to say that the final curtain isn’t due to fall on our daring duo anytime soon. All together now, ‘Hip hip hooray’ and ‘Huzzah’!

Moving swiftly on, this time our favourite (Yes, they’re your favourite as well and the sooner you admit it, the happier you’ll be) Victorian vigilantes find themselves trapped in a mischievous music hall drama as those all singing, all dancing cloth and sawdust horrors from beyond the stars, The Scorchies return (although technically, as their first appearance happens in the future, this is the their adventure and their debut is actually their return. Time travel, don’t you just love it?) in ‘Encore of the Scorchies’. Then, having dealt with interplanetary puppets, in ‘The Backwards Men’ they get caught up in the machinations of a fiendish and other worldly traveling show, murder most foul, a desperate attempt to put right a wrong that can never be atoned for and a galactic manhunt, and with a little help from a new and most unusual partner, George pulls Henry’s, and humanities, fat out of the fire. Which brings us to the events of ‘Jago & Litefoot & Patsy’, in which a mud-lark, mysterious and malodorous giant eels, extra-terrestrial eggs, a long deceased criminal overlord and a dark secretive tannery, and it’s even darker and more secretive owner, make life more than a little difficult for our steampunk detectives. Finally, we bid adieu to our heroes once more in ‘Higson & Quick’ when the events of the recent past catch up with them and they find their roles reversed, as no longer on the side of the righteous, they’re pursued by their erstwhile allies, Ellie and Sergeant (ahem, Inspector, ahem) Quick both of whom are determined to make sure that history takes a different course to the one it has apparently chosen.

As ever, series eight, and its tantalising tales of daring-do, is clever, sharp, funny, filled with feats of near super-human bravery and fantastic and deadly, possibility, and as ever it was, and is, a joy to listen to and pass an evening or five with. The plotting, pacing and writing are in a league of their own, and the cast are (as they always are in ‘Jago & Litefoot’) pitch perfect, never missing a single beat and bring each character and devilishly enjoyable story to glorious and spectacular life. ‘Jago & Litefoot’ is, and continues to be, a thing of wonder, and long may it remain so. And that sir, and madam, is all I have to say about the matter… Tim Mass Movement