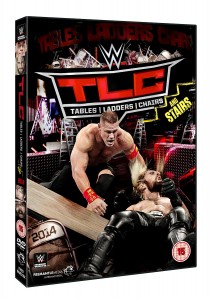 WWE TLC 2014 (WWE DVD)
As a WWE fanatic I find the job of reviewing these DVDs a lovely opportunity to go back and revisit PPV events from a few months ago and watch them again through new eyes – no longer worrying about the storyline implications and having all the baggage of expectation from what I hope will happen, but simply watching them for pure entertainment value: as a wrestling fan, is the event any good?  Usually, my initial viewing of the event means that when the DVD comes through my door it brings back specific memories before I even put the disc in my machine, and I get excited about specific matches or moments I remember from when I watched it live.

It worried me as I opened up the box for TLC 2014 that no memories at all seemed to come to the surface.  It is strange to have watched a three hour wrestling pay-per-view and find that it has left no impression at all!  But maybe I was having a bad day that first time?  Maybe the results just disappointed me and it soured the memories; my self-preservation instinct kicking in and repressing the thoughts for fear of them putting me off watching wrestling ever again (a common phenomenon when you have watched as much wrestling as I have, and been disappointed by the disconnect between what you wanted to happen and what actually did.  Like an alcoholic claiming to “never drink again”, many the time I have ended a PPV vowing that I am done with wrestling forever…until the next Monday Night Raw rolls around and I realise I’m in this thing for life!)

I put TLC 2014 into the DVD player and looked forward to watching a recent PPV that would actually feel fresh on its second viewing.
And then I remembered.
I remembered everything.
Just one little word bringing everything back: stairs.  Because this year’s Tables, Ladders and Chairs event was not called Tables, Ladders and Chairs.  It was called Tables, Ladders, Chairs and Stairs (a fact Michael Cole had endless difficulty getting his head around as he repeatedly called the show “TLC and chairs” instead of “TLC and stairs”).  The “Stairs” referred to a match between The Big Show and Eric Rowan – the WWE’s first ever “stairs match”, in which the heavy steel steps which flank the ring would be legal to use as a weapon.

The memory the word brought back was a sense of confusion: how could two men put themselves through so much pain and effort for my entertainment and yet leave me feeling so bored?
Yet, as the event began properly, and the opening Intercontinental Ladder Match between Dolph Ziggler and Luke Harper played out, I realised I must be wrong – TLC(&S) 2014 was brilliant!  At least the IC Title ladder match was!  Brutal bumps, shocking near-grabs of the belt, and the “WWE’s version of a Demolition Derby” had me on the edge of my seat with the crash and burn of its first offering.  Then there was the entertainment of The Miz and Damien Mizdow as they took on The Usos.  The comedy in this match was excellent, and I was falling about the place watching Mizdow sell for his tag partner on the outside in increasingly improbable ways.

And then it happened: the stairs match.  And it was every bit as dreadful as I remembered it to be.
A vaguely exciting match between Seth Rollins and John Cena tried to resuscitate the excitement that had been sucked out of both the arena and my living room, but it felt silly and unsatisfying watching Cena pull the Superman routine out against J&J Security and Rollins, only to ultimately put Rollins through a table to claim victory.  Table matches just don’t do it for me – anyone can fall through a table.  It never feels like a decisive win.  I remember John Cena once lost his title to Sheamus in the same way and I just went – oh…I guess there’s a new champion then?  It would be much more effective if, once through the table you then had to pin your opponent (and you couldn’t pin them unless they had first gone through a table).  In its current form it just feels like a lot of build up for something inevitable and dull (and it wasn’t helped by Cena’s victory signifying nothing changing in the number-one contender situation: not only was the ending inevitable, but it retained the inevitability of the main event in January’s Royal Rumble).

The Divas Title match was next, and though the match itself was good, the cheap ending – unnamed aerosol substance out of the sock, sprayed into AJ’s eyes – weakened the overall effect, a problem repeated later on in the card too when it came to the main event.

If anything could be worse than the Rowan/Big Slow Stairs match it was the one-two punch of a dire Chairs match between Ryback and Kane, and a go-nowhere feeding of Jack Swagger to Rusev designed simply to build up the Bulgarian’s undefeated streak that no one cares about because we all see it ending, again with inevitability, with John Cena at Wrestlemania 31.

But our main event wouldn’t let us down, right?  Bray Wyatt and Dean Ambrose – the two most exciting superstars on the current WWE roster who had already given us such great chemistry in their previous confrontations?

Well – yes and no.  The match is awesome until the very end.  But just as the end to their Survivor Series match was a let-down because it was a predictable disqualification that introduced tables, ladders and chairs simply to set up the TLC main event; here at TLC we had something equally pointless to spoil the twenty or so minutes of fun that preceded it.  For the first and only time in WWE history, we were introduced to a random live flatscreen TV that apparently lives under the ring.  Dean Ambrose finds it and looks at it, intrigued.  Then, at the match’s climax, he tries to hit Wyatt with it.  Even though it is still plugged in.  Even though a piece of cheap plastic would be nowhere near as effective a weapons as any of the many chairs and ladders lying about the ring.
Ambrose runs with the TV and the gimmicked prop explodes fakely in his hands, blinding him and causing Wyatt to be able to hit the Sister Abigail for the win.

Moments like this are what make it so hard to perform the necessary suspension of disbelief which is required to enjoy a predetermined work like professional  wrestling.  And pay-per-views like this are worth steering well clear of if you want to continue to enjoy the WWE product.
While TLC 2014 provided enough entertainment in places to make it enjoyable enough if you have to watch it, or if you watched it live when it was first aired, there is little here to make it worth investing hard earned money into actually owning on DVD.  Avoid. DM