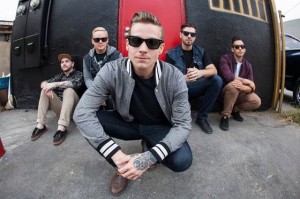 Since 2010, Richmond, Virginia’s BROADSIDE has cultivated a dedicated, underground following. The time has come to take their youthful, energetic anthems worldwide. Their debut album, Old Bones, will see its release on May 19th, 2015 and is available for pre-order now. Watch the new video for the first single “Coffee Talk”, beaming with effervescent, honest, youthful enthusiasm and passion reminiscent of the early music created by forefathers like A Day To Remember, The Descendents, New Found Glory and Taking Back Sunday.

Vocalist Ollie Baxxter says of the signing, “It’s an indescribable feeling being represented on a label like Victory Records. The roster alone raised each one of us through our angsty teenage years and was a stepping stone of pure influence in our individual musical endeavors“.

After a couple line-up tweeks and over 50 vocalist auditions, drummer Andrew Dunton and bassist Josh Glupker found their musical soulmates in guitarists Dorian Cooke and Niles Gibbs, with Baxxter added as the final catalyst known as BROADSIDE.

Recorded in Los Angeles by producer Kyle Black (New Found Glory, Paramore), all eleven tracks on Old Bones represent an experience that every young adult can relate to, from burying a childhood friend to realizing you’re just a very small cog in an overworked machine. Old Bones is a raw confession of everyday struggles.

2015 is the year of BROADSIDE, just ask Alternative Press as they’ve listed them as one of their “100 Artists You Need To Know”, and New Noise Magazine agreed, dubbing them, “a band to watch in 2015”.

Exclusive Broadside pre-order packages for Old Bones are available now at VictoryMerch.com. Starting at just $19.98, various packages include the Old Bones CD with exclusive t-shirts, tank top, longsleeve, crewneck and more. All Old Bones pre-orders include instant MP3 download of the track “Coffee Talk”. If you miss the sounds of older A Day To Remember and Taking Back Sunday but with a current and original feel, you will love what BROADSIDE’s pop-punk meets hardcore style circa 2015.