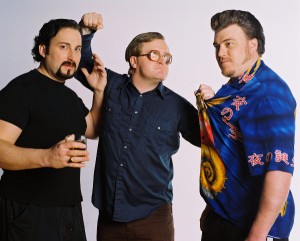 Featuring Ricky, Julian and Bubbles LIVE ON STAGE IN MANCHESTER, CAMBRIDGE AND LONDON TICKETS ON SALE THIS FRIDAY 13th MARCH

Just in time for the March 27th Netflix premiere of their brand new ninth season, Canadian cult-icons Trailer Park Boys announce their return to the UK with the EVEN MORE Drunk, High and Unemployed Tour: Featuring Ricky, Julian and Bubbles in Manchester, Cambridge and London, Sept. 16-18. Tickets are on general sale this Friday 13th March from Kililive.com / Seetickets.com.

See what happens when the boys leave Sunnyvale behind to bring Julian’s latest money making scams, Bubbles’ Hollywood dreams and Ricky’s big ideas on the road. No parole officers, no Randy and no Mr. Lahey. Having sold-out the Hammersmith Apollo on their last visit, the boys promise more drinking, swearing, drinking, hot dogs, music and drinking in the anything-can-happen, uncensored live show.

Since the original series ended in 2008, Wells, Tremblay and Smith have toured a variety of Trailer Park Boys live shows throughout North America, Australia, New Zealand, England, Scotland and Ireland; created a second series The Drunk and on Drugs Happy Funtime Hour; launched their own web channel Swearnet.com; and performed with the likes of Guns n’ Roses and Rush.

Catch up on every season, every movie and every special, streaming now on Netflix worldwide.