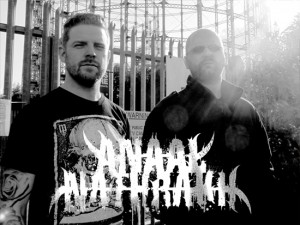 ANAAL NATHRAKH have announced another run of European dates which kicks off at the Royal Metal Festival in Aarhus, Denmark on April 11, 2015

ANAAL NATHRAKH‘s eighth studio offering, Desideratum, is out now on Metal Blade Records. Fittingly christened, “one of the most utterly fearsome and inventive outfits currently operating in the modern extreme metal scene,” by Decibel Magazine, and, “impossibly abrasive and brutal,” by MetalSucks, ANAAL NATHRAKH – guitarist/bassist/programmer Mick Kenney alongside vocalist David Hunt AKA V.I.T.R.I.O.L. – is the sound of chaos incarnate. Entirely petrifying yet inexplicably inviting, the duo’s maniacal musical dexterity, ingenuity and breadth, married with an intensely cynical intelligence is virtually unmatched in the metal world.

Reaping mass approvals from media outlets globally, Desideratum takes the very meaning of the word “extreme” to an entirely new realm of audio bedlam. Metal Injection applauds the twosome for consistently offering up, “their own special breed of terrifying, mixing up grindcore speediness with giant choruses and riffs that are the audible equivalent of total nuclear annihilation,” Noisey boasts of the record, “The snarling vocals of Dave Hunt are the focal point, with the war machine of unrelenting black metal/grind/pseudo-industrial blasts bringing up the rear. ANAAL NATHRAKH’s approach is no mercy ever, apparently,” while About.com notes, “ANAAL NATHRAKH are mesmerized by chaos, whether it be from incoherent screaming or programmed drums that blur into a mess of seismic beats. Even more intriguing are the melodic components thrown into the chaos, like the occasional soaring chorus line or striking guitar lead.” Elsewhere the verdict echoes. AngryMetalGu dubs Desideratum, “a statement of malicious intent, a call-to-arms to rally the masses and bring forth Armageddon.” Sputnik Music agrees, calling the record, “brutal, precise, and surprisingly accessible,” further commending its, “sure-footed brutality.” Adds Ghost Cult, “ANAAL NATHRAKH have realized the beautifully disgusting union of extremity and massive back-splitting, carcass-gutting hooks.”

Desideratum was produced by Kenney, with vocals recorded at Necrodeath Studios in Birmingham, and music tracked and mixed at The Black Flamingo in Orange County, California.