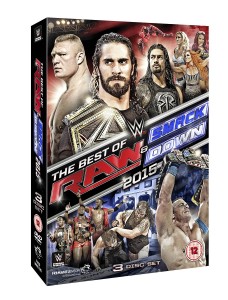 Like partner product, Best PPV Matches 2015, The Best of Raw and Smackdown 2015 is a highlight reel that attempts to cut through two hundred and sixty hours of TV content and distil the two weekly WWE flagship TV shows into their most shining moments.  Intended as a treasury of forgotten TV matches and memorable segments, it is hard to believe when watching this set that the Big Show or Mark Henry even existed, or that we had to sit through those interminable Adam Rose segments.  In theory, all the fat has been cut, and we are left with a compendium of greatest hits.

Well…greatest hits and Rusev.  Somewhere in quality control someone needs to be fired.  And Ryback features quite a bit too — a fact only mollified by the inclusion of his amazing upset defeat at the hands of Kalisto.  But if you look past the occasional bathroom break, this collection does contain some worthy matches, such as John Cena versus Sami Zayn, the Ambulance Match between Dean Ambrose and Bray Wyatt, Daniel Bryan versus Seth Rollins, The New Day versus the Lucha Dragons, Paige versus Sasha Banks, and an incredible encounter between John Cena and Cesaro.  Significant debuts included are Neville’s dramatic post-Wrestlemania appearance, and Tyler Breeze’s “invasion”  of Miz TV.  We also get the start of the Divas Revolution, some nice wacky Sting segments, and the unforgettable introduction of Kevin Owens to the main WWE roster.

But there is plenty of filler in the form of the random multi-man tag matches that WWE TV is famous for in the lead up to a Pay Per View event when creative simply can’t be bothered to write anything new and decides to just put all the parties involved in the ring together.  From an Intercontinental gauntlet match featuring most of those involved in the Wrestlemania IC Title ladder match, to a June Smackdown match featuring Roman Reigns, Randy Orton and Neville against Sheamus, Kane and Kofi Kingston, to a ludicrous August eight-man match between Orton, Reigns Ambrose, and Cesaro against Sheamus, Owens, Bray Wyatt and Luke Harper, to October’s championship Number One Contenders’ Fatal Four-Way between Roman Reigns, Dolph Ziggler, Alberto Del Rio and Kevin Owens, to the final four versus seven handicap match between The Usos, Ambrose and Reigns, The League of Nations and The New Day, WWE is not afraid to just shove a bunch of people in a ring together and tell them to fill up TV time.

Ultimately, if you enjoy wrestling, enjoy Raw and Smackdown, and want a reminder of all that went down in 2015, this collection does exactly what it says it does.  However, if you can find the time to re-watch 2015’s Raw and Smackdown on top of the five hours of Raw and Smackdown you’re already watching each week, and the hour of NXT and monthly three hour pay-per-view, and not do it just because you have to review it, you’re a better man than me!  Out of the two best of collections, Pay Per Views certainly has far better longevity and match quality going for it.  Frankly, as good as this collection is, I’m not convinced weekly episodic television needs a three disc re-cap when the product is, by it’s own design, throwaway; designed as a means to sell pay-per-views, and once it’s over we’re onto the next instalment.

While a one disc collection of simply the best in-ring action from Raw and Smackdown each year (the “lost” classics that happened to be awesome on free TV such as those mentioned in the second paragraph of this review) may have some purpose for collectors and wrestling-fans and justify its place on your shelf, each year when reviewing this title I get to a point in watching the three discs when it just feels like an over-bloated episode of an already bloated weekly TV show.  And I remember that I already watched all this before.

It’s quantity, not quality here.  That said, if you are only now getting into WWE, or were in a coma or desert island throughout 2015, it is a fairly decent recap of what happened in the WWE Universe across eleven of the twelve months.  Dan McKee