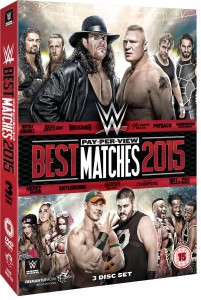 As always, WWE can’t go wrong with their annual collection of the best Pay Per View matches of the year.  The fact is, most WWE Pay Per View events will have at least one great match, even if the rest of the card is a let-down, and in reality the average of good matches to bad matches at PPV events leans heavily towards the good end of the spectrum for the simple fact that, if you put on a stinker at the last Pay Per View, it’s highly unlikely Vince McMahon and co are going to put you on at the next one when there are at least ten other hungry wrestlers all desperate for your spot.

That said, with each Pay Per View being at least three hours long, and not all matches being of equal calibre (for some reason, they continue to book the Big Show sporadically, and every so often even Mark Henry will turn up on a PPV!), the annual “Best Of” collection is a treat: all the thrillers with none of the fillers.  And 2015 was a fairly spectacular year when it came to thrillers.

Take the opening Triple Threat from last year’s Royal Rumble, for instance.  Brock Lesnar versus Seth Rollins versus John Cena.  If anything gave you an indication that Seth Rollins was ready for the main event and ready to hold the company’s number one championship it was his stellar performance in this headlining spot, stealing the show from the two veterans in the ring, and (on the night itself) even stealing the show from the ill-received Royal Rumble match itself!  He does the same again later on in the collection, with his remarkable Money in the Bank cash-in raising the stakes of an already impressive Wrestlemania main event between Lesnar and Roman Reigns (a match which surprised many before the cash-in, due to their low expectations, but which stands up to repeated viewing).  Rollins continues to shine in his nail-biting WWE Championship ladder match against former Shield partner, Dean Ambrose from June’s Money In The Bank, and in his stellar match with the legendary icon, Sting, at Night of Champions.  The match’s inclusion on here instead of Sting’s WWE in-ring debut against Triple H at Wrestlemania 31 a testament to the match’s higher quality, as both men lay it all on the line in the centre of the ring and Sting puts in a possibly career-ending performance worthy of his iconic status.

But it’s not all Seth Rollins.  The Divas Revolution is captured with a noticeable shift in Disc 3: a triple threat between Sasha Banks, Charlotte and Brie Bella is included, alongside Night of Champions’ fantastic Divas Title match between Nikki Bella and Charlotte.  Still, it is a shame that “Revolution” in this context means just two matches out of nearly twenty, and that none of the Divas PPV encounters in WWE match the level of excitement generated by any of their NXT female counterparts who regularly bring the house down and main event not only NXT’s weekly television show, but now their Takeover specials too.  However, you have to walk before you can run, and this is definitely a start in the right direction (hopefully 2016’s edition will feature far more Divas action).

The John Cena and Kevin Owens feud which delighted us all between Wrestlemania and Summerslam is well-represented here with two of their excellent matches included, as is the ferocious feud between the Undertaker and Brock Lesnar, with both their Summerslam battle and Hell in a Cell finale on offer in all their brutal brilliance.  The rise and fall of Roman Reigns is also well documented, with his Fastlane fight against Daniel Bryan (Bryan’s only inclusion on the set; representative of a year I’m sure he’d rather forget, and which we continue to hope will not be his last!) featuring alongside the aforementioned Wrestlemania main event, before unsuccessful, but equally entertaining, showings in Payback’s Fatal Four-Way and the Money In The Bank Ladder Match.  And the emergence of a flourishing tag team division is on display with multiple New Day matches — a superb championship match against Tyson Kidd and Cesaro; and a stunt-filled Elimination Chamber match that is a messy but entertaining disaster.

All in all, 2015 was a banner year for WWE’s in-ring product, as competition from NXT made all main roster superstars step up their game.  Perhaps a little too much, as a ridiculous number of competitors showcased on this collection are currently on the injured list: John Cena, Seth Rollins, Daniel Bryan, Cesaro, Tyson Kidd, Randy Orton, and Sting are all out of action as 2016 begins, perhaps opening up new opportunities for the superstars of tomorrow, but perhaps another reason to buy Best PPV Matches 2015: it is quite possible we will not have a year like this, with that depth of talent, for a very long time.