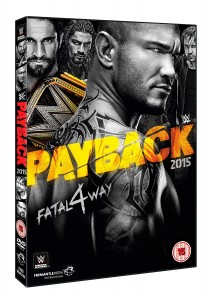 WWE PAYBACK 2015 (WWE DVD)
The problem with a PPV called Payback, is that Payback usually means something has happened for which someone wants revenge. Another way of describing that is to say that these matches have already happened, and this is a rerun where we hope the other guy will win.
Setting that theme from the start, we have the unawaited rematch between Dolph Ziggler and Sheamus, following their “Kiss Me Arse” match at Extreme Rules a month before. Other than the amazing bloodshed at the end, when Ziggler legitimately messed up a headbutt and cracked himself open on Sheamus, there is little to write home about here. This is followed by another Extreme Rules rematch, this time between New Day and Kidd/Cesaro. Aided with a two-out-of-three-falls stipulation and some “twin magic” shenanigans between Kofi Kingston and Xavier Woods, this was better than their previous encounter and thoroughly enjoyable. New Day are just likeable as a team you want to hate – I can’t stand them in a good way, and they remind me of old-school heel tag teams like the Midnight Express or the Freebirds. Meanwhile it is never not good to see Cesaro.
The third match is the first new match, but its roots lay at Extreme Rules when Ryback gave a meathook clothesline to Bray Wyatt’s brother, Bo Dallas. Despite not ever mentioning the family connection on TV and thus not generating any real interest in this match, WWE decided that was reason enough for the two to feud, leaving to ambivalence in the arena audience. The problem with Bray Wyatt since he lost his “Family” is that he has floundered in poorly written and unbelievable feud after poorly written and unbelievable feud which have led utterly nowhere. Remember his battles with Dean Ambrose? They were the best thing on WWE PPV at the end of 2014, but neither man was elevated by their battles. Then, of course, Wyatt set his sights on the Undertaker, only to lose in a nothing match at Wrestlemania (though my hope remains for this to all be leading up to a Wyatt/Taker rematch for the title at Wrestlemania 32 in Texas, a retirement match in which Wyatt both wins the title and ends Taker’s career.) I see no greater things emerging from his equally incoherent feud with Ryback. Neither man will be served well by this, despite the match itself being decent.
Oh God! Not only is the next match a rematch from Extreme Rules, it is a rematch of a match which was, itself, a rematch from Wrestlemania, which was, itself, a rematch from Fastlane: the final (hopefully) chapter in the never-ending jingoistic patriotic melodrama that is John Cena versus Rusev – this time in an “I Quit” match. Continuing the theme of Payback as a repeat, we get here the classic Iron Sheik/Bob Backlund/Arnold Skaaland ending, with Lana playing the part of Skaaland and the Russian language playing the part of the towel. At least it was more of an update now than it was in the Bret Hart/Bob Backlund/Owen Hart version they did in the nineties, but still – yawn.
The Bella Twins versus Naomi and Tamina Snuka was yet another demonstration of WWE having nothing for its Divas division to do. Three days after this pay-per-view, the NXT Takeover special aired on the WWE network and Becky Lynch and Sasha Banks stole the show in a fifteen minute classic which was the second woman’s match of the two hour card. Here on the three hour Payback, the ladies get a mere six minutes to impress, and are given little opportunity to shine. However, at least it was a relatively new match, it seems like since Neville’s debut on the main roster in WWE he has been fighting Wade Barrett in one form or another every week. Since their pre-show match at Extreme Rules at least something has changed – Bad News Barrett is now King Barrett, a title he won by defeating Neville in the finals of the tournament – but that is all, and the two men continue to show us that beyond the lazy booking of having the two British wrestlers fighting each other, WWE creative has little of significance for either of them.
At least the main event tried to be interesting, throwing the wild card of Dean Ambrose into the mix of Roman Reigns, Seth Rollins and Randy Orton (who have been fighting each other in one configuration or another for months now). But even the interesting bits were repeats – Rollins wanting to get the Shield back together to take out Randy Orton (who they fought at Wrestlemania 29), and Kane struggling with the decision to help Rollins win or cost him the title (which has happened since Wrestlemania 31). The match had some thrills, but all in all Payback 2015 is not worth spending money on because chances are you have seen everything on it already. The only Payback WWE should be doing is giving us a refund for shoddy second hand plagiarism of their own stagnant product. The fact that the bonus content on this DVD includes Damien Sandow and Curtis Axel pretending to be Randy Savage and Hulk Hogan in a homage tag team called the “Meta Powers” speaks for itself – new ideas are needed WWE, and they are needed fast. Dan McKee