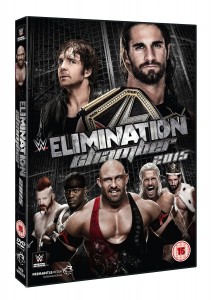 WWE ELIMINATION CHAMBER 2015 (WWE DVD)
You have to admire the money-making skills of WWE – they notice they have a Sunday event in Texas, at one of the only surviving arenas that can house the giant elimination chamber structure, and so they decide to bring back the gimmick for one night only in order to plug the WWE network (it was originally presented as a Network-only event), then they get to sell that event as a DVD like it was a pay-per-view. More to the point, the event is better than the last actual pay-per-view the WWE presented just two weeks before! Ironically, this is not because of the presence of the elimination chamber itself – both chamber matches were fairly poor, with the tag team title match in my opinion being an unmitigated disaster which saw Lucha Dragon, Kalisto, randomly dangling upside down from the top of the cage waiting for far too long to do an unimpressive stunt with little pay-off, and the intercontinental match suffering from a paucity of viable contenders, which the inclusion of Mark Henry instead of the injured Rusev did nothing to help. No. The thing which made Elimination Chamber great was wrestling. Actual holds and emotional drama. You remember – the thing that this business was built on?
Although Paige, Naomi, Nikki Bella, Neville, Bo Dallas, Stardust and Zack Ryder tried their best to entertain us, you must buy this DVD for one match and one match only – Kevin Owens versus John Cena. After months of stale business-as-usual, the NXT champion walked onto Raw as a breath of fresh air, talking down John Cena, giving him a pop-up-powerbomb and stomping on the WWE US title whilst holding the NXT belt up high. Their subsequent match here at Elimination Chamber is brutal, thrilling and believable, and the ending is the sort of ending that reminds you why you are a wrestling fan. The Match of the Year – hands down. These two performers build a compelling story, based on a believable personal issue, and unlike the string of rematches that ruined Payback the previous month, it is now as I write this three pay-per-views later and I am desperate to see the third match between Cena and Owens. When WWE remembers how to do wrestling properly, nobody does it better.
In the main event, alas, we were not so lucky. Despite Seth Rollins and Dean Ambrose putting on one hell of a match in terms of action and entertainment, the weak ending felt like a cheap way of prolonging the inevitable and forcing a rematch at Money in the Bank in June. Whereas the definitive but competitive ending to the Cena/Owens match left me wanting more, the lame finish to Rollins/Ambrose just left me feeling cheated, and put a sour taste in my mouth about the event.
Still – for the sheer pleasure of Cena versus Owens I recommend getting a copy of Elimination Chamber (just make sure you have a functioning fast-forward button on your remote control – you’re going to need it). Dan McKee