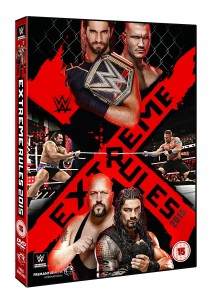 WWE Extreme Rules 2015 (WWE DVD)
Extreme Rules 2015 was an enjoyable event from start to finish, and somehow managed the miracle this year of not feeling like a Wrestlemania do-over, with fresh matches, new feuds and some creative booking that put a smile on my face.
Dean Ambrose, as always, is the person responsible for that smile. His opening contest Chicago Street Fight with former Wyatt Family member, Luke Harper, kicks off the show with the now-traditional chaos of the Lunatic Fringe when he is allowed to use weapons and the full arena, but at Extreme Rules the fight culminates in a frightened Harper jumping into a car to escape the Unstable one and Dean Ambrose leaping in after him as the car speeds out of the arena. Two matches later, and suddenly the car speeds back to the arena – only this time, much to the hilarity and confusion of the announcers, Ambrose is driving, suggesting that somewhere on the streets of Chicago he beat up Harper enough to take his car and drag him back to the show. The two men fight their way out of the car and back to the ring for a satisfying pinfall finish to the match. Excellent work from all involved which made Extreme Rules feel unusual and special, reminding me of some of the best lunacy from the old Attitude days.
While Ambrose and Harper were driving around the mean streets of Chicago somewhere, the rest of us suffered the inevitably bad but still entertaining enough “Kiss Me Arse” match between Sheamus and Dolph Ziggler (where the loser, unsurprisingly, had to kiss the “arse” of the winner). Sheamus’ new look is ridiculous, but brilliantly so, enjoying the heel heat of crowds chanting “you look stupid”, and I still haven’t worked out what exactly a “Dolph Ziggler” is (this man’s gimmick is impenetrable!), but the two did well enough before the ugly lips-to-cheek ending (which, incidentally, ended up making the whole stipulation pointless anyway, as the loser did not do what they were supposed to and instead attacked the winner – why WWE, why?) Better, was the tag team title match between New Day and Tyson Kidd and Cesaro, who reminded us all that actually wrestling well can be just as entertaining, if not more so, than silly haircuts and pointless stipulations.
As far as Russian chain matches go, John Cena’s chain match with Rusev was, as with Ziggler and Sheamus, entertaining enough. There’s basically only a handful of ways these bullrope/chain matches go, and this one was more Cena/JBL than JBL/Guerrero, which was to be expected.
Naomi versus Nikki Bella for the Divas Championship was worth watching just for the awesome colour-changing shoes Naomi decided to wear. A shame, because they vanished a few weeks later with her needless hell-turn and unsuccessful relationship with Tamina Snuka when she reverted to all-black clothing. The match is fine, but it still bothers me that women’s wrestling is so good in NXT and so mediocre in WWE. Where the women are main eventing NXT programming regularly and often stealing the show, the presentation of Divas matches in WWE do nothing to make the matches feel important, leading reviewers like me finding little of significance to talk about except the colour-changing shoes. In NXT the women’s wrestling is about the matches, in WWE it’s about bringing the crowd down after an exciting match to make sure they aren’t all blown out for the main event.
I had nothing but reservations about my least favourite 500 pounds, seven foot wrestler, The Big Show, taking on my least favourite former member of The Shield, Roman Reigns in a Last Man Standing Match, but was pleasantly surprised by the effort both men put in. Dare I say it, by the end of the match I was on the edge of my seat, and even wondered if the “please retire” chants for Big Show and months of bile aimed at Reigns for his premature Wrestlemania main event slot were out of line. But then, if you break some tables in a match for me, I’m yours forever.
Bo Dallas appeared for a few seconds, before being clotheslined by Ryback. This was an actual pay-per-view segment. I guess they felt it was justified because it would allow Bray Wyatt to begin a feud with Ryback later that week (because Dallas is Wyatt’s real-life brother). Note to WWE: if you’re going to do something like that, a) do it on Raw and stop wasting PPV time with filler, and b) perhaps tell your audience that Bo Dallas and Bray Wyatt are related, because without that information there is no clear connection between the two events!
Finally, our main event: Seth Rollins and Randy Orton battling for the WWE World Heavyweight Title inside the confines of a steel cage, with the added stipulation that the RKO was banned. This was a fun affair, with a lot of offbeat shenanigans, and the ending – Rollins using the RKO – allowing Rollins to use the best kind of heel logic the following night on Raw (while the RKO was banned, this was an SKO).
All in all, this is a solid event, with a lot of decent matches and good entertainment value throughout. Well worth a watch. Dan McKee