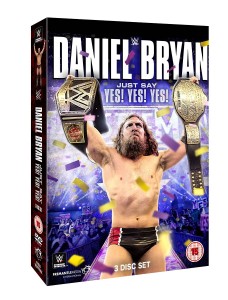 Daniel Bryan: Just Say Yes! Yes! Yes! (WWE DVD)
This is a depressing DVD. Of course it is fantastic – I don’t believe Daniel Bryan has ever had a bad match in his life, and across the three discs here we get a grand selection of superb matches from across “The American Dragon’s” WWE career (though this could also be construed as a problem with the disc – it is only matches from Bryan’s WWE career, with nothing to represent the many stellar years he wrestled on the independent circuit). However, the unique selling point of these three-disc personality profile collections is always the documentary about the wrestler’s life. Unfortunately for Daniel Bryan, WWE had already invested a lot of time and effort into making an exceptional documentary for the WWE Network – Journey To Wrestlemania: Daniel Bryan – and the documentary on Just Say Yes! Yes! Yes! is simply a mildly extended version of that very same documentary.
On one hand, that is a good thing, because Journey to Wrestlemania was a great little film, offering plenty of insight into the career-defining week that Daniel Bryan headlined Wrestlemania XXX and became the undisputed WWE world heavyweight champion. We get to see the nerves, the training, the reality behind the big show, and at its best it is like an episode of Total Divas centred around Brie Bella’s husband instead of Brie (high praise – I am a huge Total Divas fan). However, this DVD is not coming out in April 2014, but rather the late spring and early summer of 2015, and in 2015 the “Daniel Bryan story” is very different than the fairy-tale depicted on Just Say Yes! Yes! Yes! Shortly after Wrestlemania, Daniel Bryan suffered a career-threatening injury (not just his pointless go-nowhere feud with Kane – boom!) and was stripped of the title he had worked so hard to earn, laying on the bench for the rest of the year. Rather than the triumphant run we all expected for Bryan as champion, a rather inglorious few months fizzled out into nothing.
Then Bryan came back, shocking us all, and entered himself into the 2015 Royal Rumble.
Which he didn’t win.
And instead of going on to headline Wrestlemania 31 and win back the title he so unfairly was forced to give back, he went on to open the show in an Intercontinental Title ladder match and win the WWE’s secondary title.
Only to get injured again a few weeks later, fail to defend the title at the Extreme Rules pay-per-view, get stripped of the title, and, as of the time of this writing, not return to the ring again. Rumours abound that there are concussion issues and Bryan may never wrestle again. Whether or not the rumours are true, what is clear is that WWE will not trust the frail Bryan in their top spot again.
The reason Just Say Yes! Yes! Yes! is depressing is because it ends so hopefully, with Bryan’s big return in December of 2014, and his number-one contender’s match with Roman Reigns for a title shot at Wrestlemania 31. The future on this collection looks bright, but it was released at a time when we all know that it is not.
That the documentary portion itself largely sugar-coats the post-Wrestlemania injury and the entire DVD set lacks the foreknowledge of what would happen in April of 2015, makes it feel inescapably dated and shoddy, despite the quality of awesome wrestling on offer.
As a mere collection of matches, included on here are classic bouts against John Cena, CM Punk, Randy Orton, Sheamus, etc, all introduced by Bryan himself. We even get Bryan’s old WWE try-out matches from old Velocity episodes, and some of his memorable time in NXT, battling with The Miz. But with the lack of any non-WWE content (how hard would it be to buy a few matches from ROH, WWE, really?) and the outdated and incomplete documentary portion, this is not the career-defining DVD package Daniel Bryan deserves. Sadly, albeit perhaps fittingly, this release is only a B+. Dann McKee