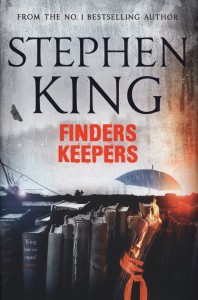 Finders Keepers is the follow-up to King’s Mr. Mercedes. The story begins in 1978, when Morris Bellamy and two accomplices break into the home of author John Rothstein – creator of Morris’ favourite character, Jimmy Gold, and his famous catchphrase, ‘shit don’t mean shit.’ There are definite echoes of King’s Misery here, as Morris is angry at how Jimmy Gold ended up, and takes that anger out on Rothstein by killing him and stealing the contents of his safe – a fair-sized amount of cash, conveniently stored in envelopes, and a bunch of moleskin notebooks containing everything Rothstein has written since he became a recluse. Excited and angry in equal measure, Morris buries his stolen treasure and is then arrested and given a life sentence immediately afterward, for a very different crime.
The main thrust of Finders Keepers then begins – in the present day, with a young boy (Peter Saubers) finding the buried treasure. Peter’s family are in financial need, his father being a survivor of the killer in Mr. Mercedes, and he uses the money to help them – falling in love with Rothstein’s prose along the way.
The story moves between Peter’s and Morris’ stories, showing what brings Morris to his eventual release from prison and what Peter does with his find. Bill Hodges, the detective from Mr. Mercedes, now runs an investigative agency called Finders Keepers, helped by his companions from the first novel, Jerome and Holly – and finds himself drawn into the case by Peter’s little sister. Bill can’t quite bring himself to stop visiting Brady Hartsfield, the killer from Mr. Mercedes, recently woken from a coma but left catatonic in a nursing home not far away.
King weaves the main characters’ stories together effortlessly, moving inexorably towards the final confrontation between Peter and Morris.
Finders Keepers is a novel that won’t let you put it down until you’re done – expertly paced, it hooks you and keeps on going until it’s done. Although the theme of a writer’s relationship with his fans is one he’s visited before, he proves yet again that there’s still fresh ground to tread – and fresh treasure to dig up. Marie O’Regan