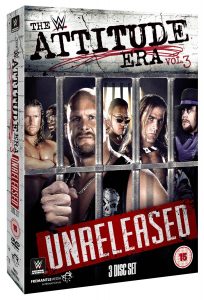 Okay, so this is a real love/hate collection.  One of those releases where, you can see what they’re doing, and understand their reasons for doing it, but ultimately don’t need it in your life.

By this point, we all know that the Attitude Era is the WWE’s DVD cash-cow.  Most of us with disposable income now, were wrestling fans then, always eager to re-live the glory days of a product that can no longer exist in a PG-corporate-sponsors-friendly television world.  So WWE try and sell us back as much of that old school goodness as we can afford.

The problem is that if we’re still wrestling fans, we already have the WWE Network, which has all the attitude-era Raws and PPVs at our disposal to dip into whenever we want.  We have also pretty much had every possible configuration of Attitude-Era matches on DVD – whether it was the two previous volumes in this series, the Monday Night Wars collections, the Attitude Era documentaries, the new Hardcore Title doc, the individual wrestler collections of Stone Cold, The Rock, Mick Foley, etc…it has all been seen a billion times before.  Does the world need another celebration of the Attitude Era?  No.  Has the Attitude Era been documented far better elsewhere, repeatedly?  You betcha!  But, is there any possible way WWE can sponge a few more pounds from those of us unable to escape the pull of nostalgia?

Yes – with the equally alluring pull of unseen and unreleased footage.

Just like a band re-releasing a classic old album with a bonus disc of rejected songs deemed not good enough to be on the original release, this is the “Attitude Era” as you have never seen it before…because these matches were not televised.  Most are taken from live shows or foreign tours, recorded on only a single, or a handful, of cameras, with no commentary.  They are the easter egg bonus tracks of WWE wrestling, and so have an inherent mystique and cool charm because of it.  Also, unlike music demos, rejected because they are not as good as the ones which ultimately were selected for the album, in wrestling it is often the case that house-show matches are better than the ones we see on weekly TV shows as there is far more time to tell a story and build the psychology of a match.  So it is wholly possible that these matches here are all gems, far better than their more famous counterparts.

While none of the matches are bad, they are all largely unnecessary beyond being quirky points of interest (the first time X and Y wrestled before their more famous PPV feud, etc.; the version of the match not shown on the eventual PPV; a dark match, etc.)  All of which is great for collectors and those of you who want to have seen every iteration of Bret Hart vs Stone Cold, or Mankind vs The Undertaker – but for those of us content with the historically “classic” matches we already know and love, much of this set is basically navel-gazing, only with less camera angles no compelling commentary to raise the action.

Corey Graves is great as host, but great hosting alone does not a compelling collection make, and ultimately he is introducing us to a showcase of the inessential, the vast majority of which seem to actually come from pre-attitude 1996-1997 period of WWE, making the set not only dispensable, but poorly labelled too.  For completests only.  Life’s too short! Dan McKee