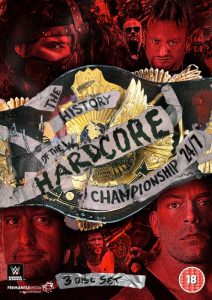 From out of the sea of ropey Attitude-era WWE DVD cash-ins, at last comes something new worth owning!  The Hardcore Championship began as a joke in WWE in 1998, when Mr McMahon gifted Mick Foley a broken up World Championship title and crowned him “hardcore champion” to fob him off from getting a real title shot in the storylines at the time.  However, it ended up taking on a life of its own and being a cornerstone of the attitude-era WWE product until the belt was finally put to rest in 2002, after the WWE opted to drop the hardcore violence and push a more PG-friendly product to woo advertisers.  This DVD set traces the history of the hardcore title, from those origins with Mick Foley, through to its zany 24/7 heyday with Crash Holly, to its rougher and tougher evolution into a serious championship belt around the waist of contenders like Steve Blackman, Rhyno, Raven, and, eventually Rob Van Dam, before finally becoming a main event belt held by people like the Undertaker and contended for by The Rock, Kurt Angle and The Big Show, and then, finally coming full-circle as a joke once again, until Tommy Dreamer and RVD respectfully put it out of its misery.

The collection is hosted via a roundtable discussion between Mick Foley, Raven and RVD, and their frank and free-flowing banter about the title, and their memories competing for it, make this set a pleasure to watch (it’s always good to have a few of Mick Foley’s Al Snow digs recorded for posterity), giving important context to each chunk of matches.

Ironically, the thing that ultimately destroyed the hardcore title is blessedly absent from this collection, despite being three discs of hardcore action: in real life, at some point, the hardcore aesthetic lost its value.  Matches became samey – just an excuse to hit people in the head with trashcans and kendo sticks without any real psychology.  On the set, each match offers something new or different, and by the end of the three discs you are hungry for more (and I would not be surprised if the release of this collection is not some sort of toe in the water regarding bringing the title back now we have the new brand split and the return of the cruiserweight division on Raw…a hardcore title on Smackdown maybe?  All I know is it certainly made me eager for a hardcore title revival after remembering how fun the belt used to be).

“The only championship in WWE that is defended 24/7” made the hardcore title the company’s zaniest strap, and this collection shows Crash Holly defending his title at theme parks, airports, even in his sleep.  But it was also a serious vehicle for developing the depth of the mid-card, and the collection does a great job at highlighting the wrestlers who made their name with the hardcore title.  Crash has already been mentioned, but his “cousin” was once known as Thurman “Sparky” Plugg, before becoming known as “Hardcore” Holly thanks to his adeptness with steel-chairs and tables.  And nothing defined Steve Blackman better than the hardcore title matches which cemented this attitude-era anomaly (a man with no real gimmick other than being kick-ass)’s reputation as “The Lethal Weapon”.  Four of his matches are included here, along with a bunch of Test matches, Raven matches, Tajiri matches, and Rhyno matches.  A subtitle to this exceptional set could easily be “the unsung heroes of the attitude era”.

But it is really when Rob Van Dam becomes champion that the hardcore title match becomes an artform, and platform for innovation.  Through Van Dam we see the true possibilities for hardcore wrestling – not just weapons and brawling, but scientific and high-flying wrestling, where weaponry is used to help tell the story, not simply for the sake of it.  Indeed, it is ultimately this eye-opening approach in WWE that made the hardcore division redundant: we get hardcore wrestling all the time in WWE these days, they just don’t call it hardcore when it happens.

Ultimately, this collection is a celebration of the many different facets of hardcore wrestling, as showcased in WWE throughout the attitude-era.  It is a great way of remembering the mid-card of that time if you lived through it the first time, and experiencing it anew if you did not.  It also makes clear the debt so much that we take for granted today owes to the innovators of yesteryear, here shown in all their glory.  A must watch! Dan McKee