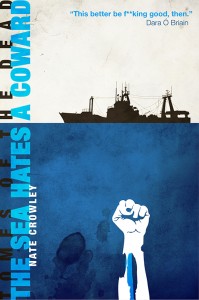 If you set out to write a whaling story, you’ll find there’s quite an elephant in the room to be worked around.
Well, maybe not an elephant. But an extremely large mammal nevertheless, and one with an intimidating reputation to boot: Moby Dick.
Melville’s book has so closely attached itself to the territory that it’s hard for any other fiction to stray into the business of pelagic slaughter and not seem like pastiche.
And no wonder, either. As a culture that no longer hunts whales, we’ve supplanted our memory of an industry with the set dressing from a masterful work of fiction. Consequently, to write about whaling in any way is to write about Moby Dick.
I’m definitely no exception. While my story, The Sea Hates a Coward, is certainly not an attempt to achieve anything on the level of Melville’s book, it’s memetically infested with it: scrimshaw, harpoons, try-pots boiling with molten blubber, pale leviathans and splintered pinnaces, all feature heavily. You’ve got to pay your respects, after all.
But while I couldn’t resist dipping into the mythological stew pot of the Nantucket era, it was a very different type of hunt that inspired me.
Whaling makes us think of creaking sail-ships and salt-bearded mariners in the South Seas, but the industry that inspired Melville was just a prologue to something great and terrible. By the 20th Century, the development of engines, refrigeration and weapons technology had turned a risky pursuit into a mechanised extinction event.
This was the whaling of diesel smoke, hydraulic winches and cannons, gargantuan factory ships and explosive harpoons. Genocide, frankly, conducted in order to grease the gears of rampant industry.
And despite our relief that the annihilation of the great whales stopped when it did, and our shame that it took that long, it’s hard to deny that mechanised whaling prompts a strange sort of awe. It’s the same sort of chill you feel when imagining the Somme – a disbelief in the insane scale that tragedy can take on when driven by technological society.
Naturally, then, when building the setting for my story, I wondered how I could increase both the scale and the sense of bleakness involved in 20th Century whaling.
What I arrived at was a ship the size of a city; adrift on a world of measureless ocean, and hauling in a stream of monsters (that genuinely do eat whales for breakfast) in order to feed a huge and distant city. Crewing this nightmare are the city’s executed dead – its dissidents, murderers and prisoners of war – reanimated to work in a place too grim for the living.
Cheerful stuff, right? But although the book definitely has its fair share of horror, it’s not meant to be a depressing read – anything but, in fact. In amongst all the brine and the brutality, it’s about the wonderfully human habit of making the best of a bad situation.
Because whaling stories, for me, are about struggle. The insanity of a human leaping onto the back of a 45 ton predator with a sharpened stick; the men who made a huntingpact with an orca; the cannibal crew of the whale-stricken Essex. Whaling provides an incredible stage for human drama – and one that’s all the more potent for being built on giants’ bones.

Nate Crowley
Nate Crowley lives in South East London, and​ knows too much about the history of public aquaria​. Once, he ​accidentally punched a wrasse while wearing a diving suit from the 1800s. He keeps a List of Animals. He is the author of Daniel Barker’s Birthday, and can be found on twitter as @frogcroakley. The Sea Hates A Coward is his first wossname.

The Sea Hates A Coward is published by Abbadon and is available in ebook format NOW.