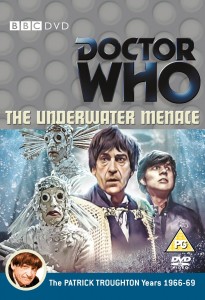 Doctor Who: The Underwater Menace (BBC)
Some stories are so mired in gossip and rumour that it becomes almost impossible, much like doomed Sisyphus, to escape the fate bequeathed to them. Such was the destiny of ‘The Underwater Menace’, the latest of the legendary ‘missing episodes’ to have been unearthed and restored by the BBC. It’s long been known that Patrick Troughton didn’t enjoy making ‘The Underwater Menace’ and wasn’t exactly enamoured by it after filming was finished. With scant surviving televisual footage (one episode), the only way fandom could really judge the story on its merits was through the soundtrack, the novelisation and more than a little imagination. And on that basis, I’ve always enjoyed it. Granted, it isn’t the strongest of the early Troughton stories, but I’ve never been comfortable indulging in salacious whisper, and as I love a good old fashioned, “boys own” adventure I developed more than a soft spot for ‘The Underwater Menace’ through my rabid consumption of the story via the only available, and previously mentioned, media. So, the question is, having now been able to watch the restored version of ‘The Underwater Menace’ in its most complete form (the two surviving episodes combined with two made up of the digitally enhanced soundtrack matched with tele-snaps taken during filming) since it was originally broadcast, which of us was right? Did, and does, the idle chatter surrounding it have some basis in fact? Or was I right to believe in its inherent magic for more than two decades?

Honestly? Both are true, to a certain degree. While an awful lot happens on screen, there isn’t really much to the story, which basically boils down to The Doctor, Ben, Polly and Jamie having to save Atlantis from the clutches and schemes of a “mad” scientist who’s insane endeavours will ultimately destroy not only the fabled lost city, but the Earth as well. The plot and frantic, with as much being crammed into the story as possible, and the stereotypical characterisation of priests, kings and crazed villains all perfectly the tropes of the time, which lends the drama an air of familiarity which instantly allowing you to submerge yourself in its strange depths. As the story progresses though it, does being to feel more like a Roger Corman’s version of an Edgar Rice Burroughs novel than the usual Who fare which might go some way to explaining why it’s seen as being ‘unique’ in the annals of the shows history. The still imagery of the opening episode lends it a haunting, ethereal almost Lovecraftian atmosphere, which is rather apt given that it’s a story of fish people, forgotten and decaying civilisations, biological experimentation and insane science. This Lovecraftian undercurrent infuses the rest of the tale, further demonstrating why it’s seen as being a bit of an oddball, as arguably it has much more in common with the fantastical horror and weird tales of the thirties pulp magazines than the historical and science fiction stories that Doctor Who had built it’s reputation around.

While the budgetary constraints and shortcomings in the script are obvious, ‘The Underwater Menace’ is far better than its reputation would have us believe. Yes, it does have the odd bizarre moment, such as the Doctor “disguising” himself as a slight curious beatnik, proto-hippie musician, the surreal underwater fish-people scenes that are fuelled by the keyboard led early electronica soundtrack and the needless murderous rampage that the baddie indulges in, but on the whole the good far outweighs the bad. The way it explores the deception of religion, the price paid for blind devotion to faith and authority was incredibly courageous for the time, and while some of the performance are a little over the top, the formative portrayals of the Doctor and Jamie by Patrick Troughton and Frazer Hines, offer a hitherto unseen chance to witness the beginning of one of the most endearing d well established relationships in the Whoniverse. Peculiar, outlandish and offbeat, ‘The Underwater Menace’ may well be out of step with Who canonicity, but it’s enjoyable, entertaining and unusually engaging. Sometimes it’s good to be different… Tim Mass Movement