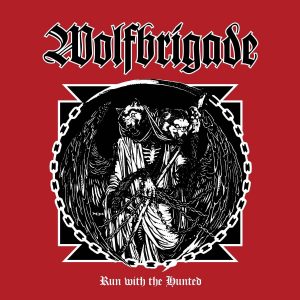 There may be an alternative universe somewhere where Wolfbrigade don’t release brilliant albums but I doubt it.  Twenty two years in, the Swedish quintet still release as vital and angry a brand of crust engrained hardcore punk as you could imagine or wish for.

Without straying too far from their tried and tested formula and easily hitting the standards set by Prey to the World, Comalive and Damned, Micke and company sound as energised as they did when Lycanthro Punk set the standards in a Scandinavian crust punk scene that was absolutely dripping with quality.  That scene may have waned slightly recently but doses of songs like Nomad Pack and Lucid Monomania assure that Wolfbrigade themselves are still the standard bearers by some distance.  When lead-off lyric video teaser Warsaw Speedwolf kicks down into its killer later riff you know that all is good and when Jocke and Erik peel off the gut-punch riff of Return to None you know that fuck all is gonna touch this record anytime soon. Probably not until the next Wolfbrigade record comes out.

As final song Dead Cold fades out you know the repeat button is getting hit and will do many times over.  Another stormer from Wolfbrigade but if you knew them already that was pretty much a given and if you didn’t know them already, what the hell have you been doing?  Sort yourself out, now!! Darrel Sutton