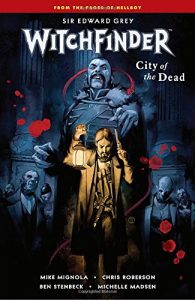 The discovery of an ancient temple beneath Victorian London and rumours of cannibal revenants running rampant, lead authorities to once more call upon the services of Edward Gray, the Crown’s official occult investigator.

Edward Gray: Witchfinder is very much in the tradition of the Occult Detective pulps that clearly hold much fascination for Mignola and his motley circle of accomplices. More specifically I think a line of influence could be drawn directly from Manly Wade Wellman’s gentleman detective John Thunstone, with whom Grey shares a great many similar traits and characteristics.

As the odds slowly stack against Grey and the long knives of his enemies draw dangerously near, Grey finds himself forced into a grudging alliance with the Heliopic Brotherhood of Ra, the secret society he had sworn to destroy. The horrifying events that unfold throughout the course of City Of The Dead are tempered by the amusement wrought by Grey’s uniquely British approach to dealing with such matters. Unquiet graves, nocturnal visits from an African medicine man, ancient vampires and sinister cults nothing seems to phase the indomitable Englishman. Grey dispatches flesh eating corpses and all manner of ‘hoodoo’ armed only with a stiff upper lip, a well pressed suit and rapier concealed within his cane. Classic style.

Stenbecks art perfectly compliments the tone and mood established by the Mignola and Robersons’ period heavy script, and his style, whilst distinct, definitely possesses enough menacing echoes of Mignola that leaves no doubt we are in the Hellboy universe. And Stenbeck throws in plenty of subtle visual clues and easter eggs that are a real treat for any diehard fan of the Mignolaverse. I particularly enjoyed the tasty reference to Hellboy: Wake the Devil.

Michelle Madsen’s colours are the perfect choice for Stenbecks moody pencils and really draw you into the grime and darkness of Grey’s world. Each page feels as though, if held to the nose, would stink of open sewers and laudanum and I mean that as a compliment. And it would be a gross disservice not to mention the spectacular chapter break artwork of Julian Totino Tedesco who painted the original covers. Absolutely stunning.

This volume really is a slow burner of an adventure mystery and Chris Roberson and Mignola escalate the threat and tension levels masterfully, driving the story forward but never showing their full hand until reaching its terrifying finale. City Of The Dead kept me on the edge of my seat and engaged with the story in a way that precious few comics have managed lately. An absolute pleasure to read and with enough story threads left ragged at the hem, I am certain Edward Grey’s war against the forces of darkness has only just begun. Nathan Bean