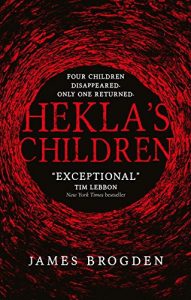 Hekla’s Children wasn’t a book I fancied reviewing. When it arrived with a couple of others, I quickly scanned its blurb and equally quickly relegated it to the bottom of the pile. Not a big fan of children, you see – hate the things; absolutely refute the suggestion I was ever one myself – so upon reading this was about four of them vanishing into some strange netherworld, I thought, hokey dokey, let ‘em stay there, I don’t much care.

But then this happened. The book started whispering to me. Not literally – only the demon on my shoulder does that – but subconsciously, as if something I’d read in the synopsis had implanted itself in my head and was calling me back. So I decided to dip into it, a chapter or so at a time, during lunch, rather than going at it as a whole.

And here’s the thing: I began to enjoy that lunchtime read. Well, maybe not enjoy, it’s a little too bleak for that, but certainly looking forward to finding out what happens next. That’s rare for me, these days, but here James Brogden has managed to construct a tale that does indeed whisper, and in doing achieves what every writer ultimately wants to gift their readers – an actual page-turner.

Its Broadchurch meets Stig of the Dump meets Red Shift with Alan Garner wearing his adult though not too up-his-own-arse hat. Hekla’s Children and its other world of Un is genuinely haunting with a whisper that is profound.

It’s difficult to go into detail without blowing the twists and turns, but the events that entangle the missing kids – Bran, Scattie, Olivia and Ryan – and their guilt-ridden teacher, Nathan Brookes – feeling responsible for their loss some years before the main thrust of the narrative – entangles you too, as the age-old conflict between antagonists Barkfoot and the Afaugh unfolds. What you get on the journey is fantasy horror with a part police-procedural, part Time Team, part CSI twist, that’s almost YA but claws – no pun intended, well, okay, maybe, you’ll see –  itself into adult territory with a couple of deliciously uncomfortable scenes. In the end it delivers a rite of passage and unexpected fate for everyone involved – at least those who survive – and I recommend it wholeheartedly. This is one that’ll stick in your mind. Mike Wild