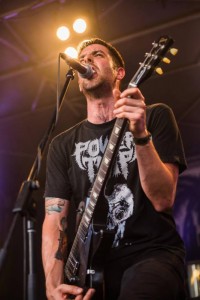 Formed by current members of Heartsounds, former members of defunct Light This City, and more, WILDERNESS DREAM‘s sound has been established on their self-titled debut release, presenting the act’s unhinged vocal sincerity, blistering twin guitar assault, and undeniably crushing and thunderous rhythm section. Clocking in just short of fifteen minutes in duration, the six songs here reflect a sonic attack reminiscent of thrash legends Sacrifice and Testament, with a violent and unrestrained vocal approach, more akin to crossover acts such as Cursed, Ringworm, and Integrity. Wilderness Dream was recorded, mixed and mastered by Scott Goodrich in July of 2015 at NuTone Studios in Pittsburgh, California. Lyrically, the record adopts a stripped-down and bleak approach to the death-obsessed, anxiety-ridden regurgitation of daily life, moving through an overpopulated, immoral, and devastatingly distracted human landscape, and exploring the futility and uncertainty of the future, while never negating our all-encompassing, ever-growing and universal fear of the end.

WILDERNESS DREAM‘s entire self-titled EP is now streaming in its entirety at THIS LOCATION.

Wilderness Dream will see an October 16th release via Murray’s label, Creator-Destructor Records, in 12″ 180-gram black vinyl, with a silkscreened B-Side in a gatefold jacket with download included, as well as all digital outlets. Preorders for the vinyl are available HERE; the record can be ordered digitally now via all major platforms and via Bandcamp HERE.

In support of their debut, WILDERNESS DREAM is booking shows across the West Coast for the coming months. The band has just confirmed upcoming live performances throughout October, November and December, where they’ll deliver their pummeling tunes to fans alongside the likes of Landmine Marathon, Katakalysm, Belphegor, Fuck The Facts, Maruta, Vattnet Viskar. The band will perform at a hometown record release show for Wilderness Dream alongside labelmates Mohicans and others on October 27th, and just days later will raid Gainesville, Florida to take part in The Fest 14 joining Andrew W.K., Government Issue, Iron Reagan, Lagwagon, Cult Leader, Modern Life Is War, Title Fight, Young Widows and dozens more. Additional tour dates will be announced in the coming weeks.