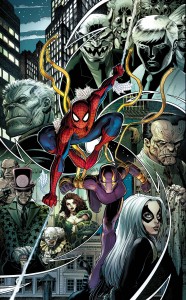 This March, experience a Spider-Man story like you’ve never seen before as Peter Parker takes on the criminal underworld in Amazing Spider-Man: Spiral, a brand new 5-issue series beginning in AMAZING SPIDER-MAN #16.1! Legendary Spidey writer Gerry Conway returns to the webhead along with blockbuster artist Carlo Barberi for an all-new tale of crime, corruption, and the dark corners of the Marvel Universe that will alter the landscape of the criminal underworld!

Spider-Verse may be over, but Peter Parker’s troubles are just beginning. A crime wave rips through New York City. The underworld is still in flux following the Kingpin’s removal from Shadowland. Gangs wage turf wars unchecked on the streets of Manhattan. The gang war is heating up and Spidey is going to do something about it!

Only he’s not alone! Police Captain Yuri Watanabe meters out her own justice both as a member of the NYPD and as the vigilante known as THE WRAITH! But do she and Spider-Man play by the same rules? How far is she willing to go to keep New York safe?

“Hammerhead; Tombstone; the Circus of Crime; Black Cat and Mr. Negative – they’re all at each other’s throats because there’s no single overlord of crime currently running things in New York,” says Gerry Conway in an interview with Marvel.com. “Things only escalated, especially after the Goblin King fell out of the scene and Doc Ock is no longer operating as the Superior Spider-Man – keeping a lid on everything.”

Only one criminal can rule the underworld. But that won’t stop them from waging war in order to claim the throne. Who will come out on top? And who will be left standing when it’s over? Find out when the epic Amazing Spider-Man: Spiral kicks off in AMAZING SPIDER-MAN #16.1 this March!