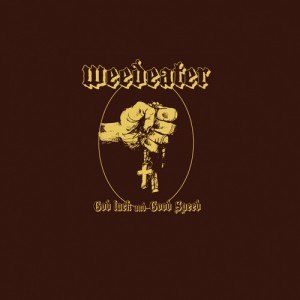 Weedeater – God Luck And Good Speed CD (Season Of Mist)
Southern fried sludge, weed metal, stoner, doom, crust infused fuzz groove, call it what you will, but one thing is for certain, there is no denying North Carolina’s Weedeater are heavy as fuck! This third re-release from the trio (originally released in 2007) is part of the warm up plan whilst a new album is in the making, a tasty way to introduce anyone into the hellspawn, which is being created; or just a collectable piece of coloured wax for those wanting more. Weedeater’s thick intense sound is given clear credence by Steve Albini’s production, the two go hand in hand, and ‘God Luck And Good Speed’ is a plethora of super fuzz and deep resonance. The crushing cover of Lynyrd Skynyrd’s ‘Gimme Back My Bullets’ is a fitting epitaph, and tips it’s hat nicely in their own swamp ridden way. Weedeater confirmed cult status and credibility way before the hipsters became involved in this genre. Heavy groove, guitar licks that range from intricate to down right basic, and rustic vocals make Weedeater one hell of a nasty bastard! Mark Freebase