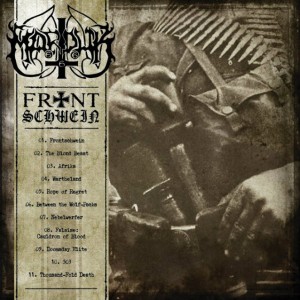 Marduk – Frontschwein CD (Century Media)
With 1999’s ‘Panzer Division Marduk’ the band really made a black metal landmark, but then never seemed to keep the significance. However, now the Swedish quartet return with their thirteenth full length album which once again embraces the fitting war theme which runs through the entirety of this black metal offensive ‘Frontschwein’. Cannon fodder or front pig (as the album title suggests) is an appropriate title for the full-on bombardment of metal the listener is exposed to. Marduk’s sound is a weighty assault, yet not indecipherable, it’s cocktail of power and speed manages to include some hammering chorus lines of the finest extremities. There is no holding back as the title track shows (see video clip below); along with other intensities ‘Doomsday Elite’, ‘Rope Of Regret’ and ‘Thousand-Fold Death’ to name just a handful, and as the insanely power-blasting drums confirm, along with aggressive guitar riffs and agonizing vocal bellowings, we have an album of compounded hatefulness. As you’d expect with the black metal sound, the guitars carry a higher pitch, as opposed to a deeper dropped note, but this only amalgamates the insanity. Having said that ‘Frontschwien’ does show a heavier deeper side, with mid-tempo tracks such as ‘The Blond Beast’ and ‘Nebelwerfer’, which does expand on the bands brutality – all the time never over shadowing the musicianship. The best black metal record released for a long time. Mark Freebase