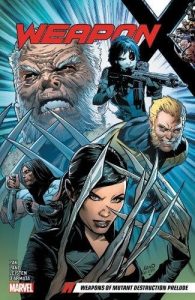 Weapon X. Just the mere mention of the clandestine government program sends shivers of excitement and horror down the collective spine of fandom.  Having given the world Wolverine, Deadpool and a whole host of other mutant super-soldiers, the factory of horrors and pain was eventually disbanded with prejudice and faded into memory. Until now. When first Logan, then Sabretooth, Domino, Warpath and the Totally Awesome Hulk are set upon by cyborg’s schooled in the art of murder, and adapted solely for killing mutants, and having discovered that they’ve all been targeted by a seemingly revitalised Weapon X for nefarious, terrible and furtive purposes, they’re left with little choice but to team up and take the fight to those who seek to do them harm.  And so the hunters become the hunted and in an orgy of blood, pain and a truckload of destruction, the hunted become the hunters and rain down devastation on Weapon X.

As the title says, this is just a  prelude, the opening arc is what promises to be a spectacular story of uber-violence, dark espionage, secret agenda’s and motivations most foul, as Grek Pak eases back the lid of Weapon X’s own Pandora’s Box and begins to move his pieces into place. Forsaking character development  in favour of, and assuming that his audience is at least familiar with the protagonists, it’s viscera soaked, hit the ground running and don’t pause for breath until the last page plot, Weapon X: Weapons of Mutant Destruction gives its readers exactly what they want. Old Man Logan, Sabretooth (forced together by necessity in an, at best, fragile partnership) and company doing what they do best. And while what they do best isn’t exactly pretty and is also more than a little messy, it is a whole lot of fun and thanks to Land, Roberson and Gill, is captured in full gory, and detailed, glory. Let the mayhem begin… Tim Cundle