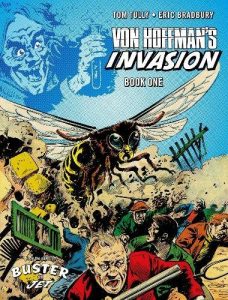 Who would have thought that the pen that brought us the weekly adventures of Roy Race in Roy Of The Rovers for over 30 years, could write such a fantastical story as Von Hoffman’s Invasion? Dig a bit deeper and you’ll find that writer Tom Tully has actually got previous form in the sci-fi genre, having penned projects for 2000 AD such as Dan Dare, as well a stint writing the Doctor Who comic strip in the 70’s. It’s all those influences that serve him well here as Von Hoffman’s Invasion is simple Sci-Fi at its very best, with fully developed characters that’s set in a world familiar to all.

Evil Nazi genius Von Hoffman, has a score to settle with the British. Imprisoned for twenty five years after World War 2, he is now free and has perfected a gas that can enlarge animals, which the crazed Nazi intends to use on an invasion of poor old Blighty. Standing in his way though are two brothers Barry and Joe Drake who are looking to thwart the mad genius and his giant creatures.

First published in comic strip form in Jet in 1971, the first thing you notice is just how quaintly British this book is. Being as it was written in the 70’s, the language and attitudes of the characters are captured perfectly. Boyhood innocence, stiff upper lips, the helpful British copper on his beat, much like his days writing for Roy Of The Rovers, Tully’s social take on Britain is spot on and legendary artist Eric Bradbury has also captured those times perfectly, whilst clearly taking influence from some of the infamous 50’s monster infused, B-movie dive in specials. With World War 2 still fresh in a lot of people’s minds at that time, a Nazi was always a popular choice for a villain, but Bradbury’s artwork still manages to give Van Hoffman an extra maniacal edge which is in complete contrast to the wholesome look of the Drake brothers.

These were weekly serials when they  originally appeared so the story does tend to tread the same path a lot of the time, just with a different “big bad” but there’s always enough to keep you wanting more. A superb collection from a simpler time that’s a pure comic indulgence. So indulge away people… Chris Andrews