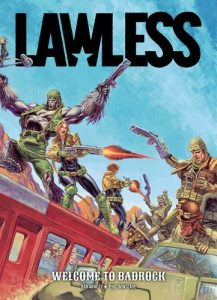 With Star Wars spin off movie-Solo hitting screens the world over recently, it would seem the perfect time for Rebellion to release a Sci-Fi/Western book, would be now. So that’s exactly what they’ve done. Ripped from the pages of Judge Dredd Megazine, Lawless has now been collected together in the first of what promises to be a great series of graphic novels.

Five years after an invasion from the Zhind, 43 Rega has become run down and desolate and the wrong kind of people have taken over. In a storyline similar to Mel Brooks’ Blazing Saddles, only minus the flatulent cowboys and casual racism, the town is desperate for somebody to get things back in order. Marshal Meta Lawson is dispatched to clean things up, but what is her story and is she who she claims to be?

In many respects this is a Judge Dredd story in its purest form. A judge, with a dubious back story, sent to catch the bad guys and in that there’s a certain comforting familiarity. The difference here is the setting, which serves to open up the world of Judge Dredd, just a little bit more. I mentioned Star Wars at the beginning and the comparisons don’t stop there. Lawson is very much in the mold of the rugged Han Solo, albeit in female form. They’ve created a strong female character, without looking like they are trying too hard, so the plaudits should go to the immense talents of writer Dan Abnett (Marvel, D.C, Black Library etc.) for that, as all too often the introduction of a strong female character can seem forced and clumsy.

A marvelous character driven story, which requires no prior knowledge of anything Dredd related as it can quite easy stand on its own, but for fans of old Stoney Face, Lawless is also a more than worthy addition to the world of Dredd.  Chris Andrews