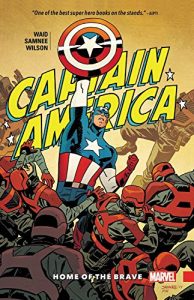 Returning Captain America to the realm of the righteous after Secret Empire was never going to be an easy task. His face now synonymous with Hydra, his name and reputation tarnished by the Red Skull and the events sent in motion by the collapse of Pleasant Hill, Maria Hill’s secret super-villain “prison”, finding redemption and rediscovering his purpose has become everything for Steve Rogers. So like Hawkeye and Kwai Chang Cain before him, Steve hits the road on a voyage of self-realisation in an effort to find out where he belongs by exploring, and helping out where he can in, small town America. But nothing is ever straight forward with Captain America and his sabbatical also serves a double purpose, as having received the sort of “For Your Eyes” intelligence about Rampart that would make James Bond do a double take, Steve is also on a mission to destroy every single cell of the organisation that’s determined to fill the void left by Hydra and S.H.I.E.L.D. It’s a clandestine operation that allows him to reconnect with his fellow citizens and in doing so, allows him to step back from the place he’d exiled himself to after Secret Empire. Seeing himself through the eyes of his fellow Americans allows him to finally stop blaming himself and get back to doing what he does best. And in Home of the Brave he makes a more than impressive start by saving a very special town from a returning Rampart, preventing the new Swordsman from taking the lives of thousands and rescuing a hellish future America from his newest, bestest enemies, Rampart.

Mark Waid knows Steve Rogers inside out and seven ways from Sunday. He knows what makes him tick, how he thinks and how he’ll react in any given situation and he utilises all of these factors to maximum effect in Home of the Brave. While the tales of small town America and Cap are incredibly engaging and have a homespun, personal,  and at times almost retro feel, that’s all too often missing or ignored in modern comics, it’s in the dystopian story of an alternative future where Waid really shines. Using it as a metaphor for the current political climate in which America has found itself and the road that it might ultimately find itself travelling down, Waid makes no secret of his disdain for the political leadership currently governing the US and sends Cap to save the future from the dictatorial clutches of the elite for whom power and control everything. It’s exactly the kind of story that Captain America was designed to take the lead in and in the space of a couple of issues, accompanied by the devastatingly incredible old school artwork of the man born to draw Steve Rogers  and the authors partner in crime Chris Samnee, Waid dispels any lingering doubts that the faithful might have had about Cap after the Hydra affair. And it is absolutely brilliant. Welcome back Steve… Tim Cundle