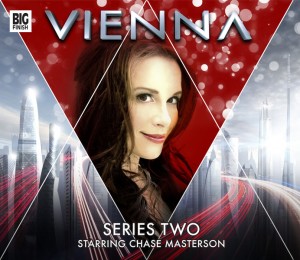 Vienna: Series Two – Starring Chase Masterson, Samantha Beart, Harry Diston, John Schwab, Tim Beckmann, Duncan Wisbey, Nigel Carrington, Regina Regan & Donna Berlin & Written by James Goss, Cavan Scott & Jonathan Morris – 3xCD / Download (Big Finish Productions)
Ah, Vienna Salvatori, the secretive assassin who keeps her identity hidden, always works alone and never lets emotion (or attachments) get in the way of doing her job. At least, that’s the idea in principle. In practice it never seems to work out that way. Although as batting averages go, two out of three isn’t all that bad, it’s just that the whole feelings and friendships thing keeps getting in the way, no matter how hard she tries to prevent them hindering her progress up the career “ladder”. Which, when you kill people for a living, should be pretty easy to climb as you just shoot, stab, poison, garrotte or arrange a little accident for the person in front of you, and up you go, clambering over their twitching corpse without so much as a “How do you do?”. And it would be that easy for Vienna if she didn’t keep getting involved in her clients lives, or didn’t find herself becoming tangled up in increasingly complicated, and often incredibly messy (there’s no such thing as a beautiful corpse folks, and that’s a fact) cases and situations. And in this second series, things become even more complicated as she finds herself on the opposite side of the law, defending truth and justice and protecting and serving the public as a police officer.

Well, I say police officer, she’s really just been hired for an exorbitant amount of money as a “consultant” by a law enforcement corporation in order to help them track down a shape shifting killer, who she (with a little help from one of her colleagues) manages to trap in the ultimate in tourist “luxury”, a personality hotel. A vacation hotspot that wipes its guest’s memories in order to let them become someone else for the duration of their visit, which is where Vienna’s problems begin. How do you track down a killer if you don’t know who they are, where you are or even who you are? From there, as if that wasn’t bad enough, Vienna’s thrown out of the frying pan and straight into the fire, as she finds herself dealing with corruption, mob hits that never happened, monsters, a city that wants to kill her, the vicious double dealing of a huge corporation that believes it owns her mind, body and soul, the shape shifter that just won’t go away and top it all off, as if that wasn’t enough, she’s not really feeling like herself. One thing’s for sure, when Vienna Salvatori is on the case, life is far from boring. It may be bloody, short and brutal, but it’s never boring.

‘Vienna’ is far from being just another Whoniverse spin-off, and with ‘Series Two’ has firmly established its own action packed, blackly funny credentials. The plot, spread out over the tree linked tales in this box set, is full of twisting and turning, blink-and-you’ll-miss-it action and the superb characterisation (Chase Masterson’s wise-cracking, sarcastic, mistress-of-the-put-down’s, six-shooting, bone-snapping anti-heroine is always a pleasure to listen to) and performances make this series an exhilarating thrill ride that you just don’t want to stop, or get off of. The minute it finishes, you’ll press play again and jump straight back into it, not just because you might have missed something the first, second, third and fourth times you listened to it, but because it’s so damn enjoyable, you’ll want to listen to it again. And again and again. Damn it’s good, and it just keeps getting better and better… Tim Mass Movement