Warning: preg_match() expects parameter 2 to be string, object given in /var/www/vip4/sites/vip6102689/httpd/htdocs/wp-includes/formatting.php on line 4866
 In God We Trust – Winshluss - Mass Movement
x
Spread the love 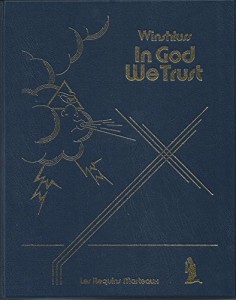 In God We Trust – Winshluss (Knockabout)
It doesn’t matter what you think about religion, what you believe or have faith, in, the fact is, The Bible is the most read book in Human history. Even people who would normally shun the idea of reading for pleasure, or indeed reading at all, have read The Bible and whether you see it as source of moral guidance, the literal word of an all-powerful deity or a best-selling work of fiction it remains of pivotal importance to (Western) society as a whole. Which is probably what appealed to Winshluss when he decided to re-imagine the lessons and stories of ‘the good book’ in his own inimitable, and wickedly funny fashion in ‘In God We Trust’.

From creation to end times, Winshluss, via the narrative guide Franky (the patron saint of comic strips and beer who died defending a monasteries supply of ale in the thirteenth century) takes us on alternative trip through the defining moments of ‘The Bible’ in a counter-culture adventure that reimagines just about everything you thought you’ve ever been told about the ‘big man upstairs’, his rationale and motives for doing what he did, and does. ‘In God We Trust’ is a wonderfully affectionate, satirical romp that combines the best of, and is heavily influenced (both visually and narratively) by Robert Crumb, Gilbert Shelton Rene Goscinny and Albert Uderzo and is filled in equal measure by laugh out loud and “Did-he-really-just-do-that?” moments ( his account of the “immaculate conception” is sure to raise an eyebrow or two) and a slew of fake advertisements that point an accusatory finger at the fallibility and inexcusable excesses of religious institutions and their appointed keepers, protectors and guardians. It’s hilariously offensive, but at the same time viciously intelligent and illustrates the idiocy of basing modern foundations of culture and society on a book that was first published nearly five centuries after the demise of its central character. Thoroughly recommended… Tim Mass Movement

Books
One comment to “In God We Trust – Winshluss”