Warning: preg_match() expects parameter 2 to be string, object given in /var/www/vip4/sites/vip6102689/httpd/htdocs/wp-includes/formatting.php on line 4866
 Game Of Thrones: In Memoriam - Mass Movement
x
Spread the love 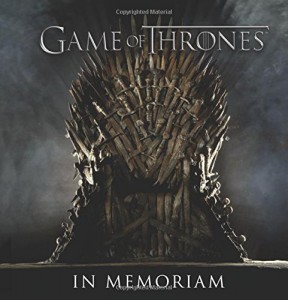 Game Of Thrones: In Memoriam (HBO / Running Press )
Back in the mists of time (that’s 1980 for those of us who were there), The Jim Carroll Band released a single, ‘People Who Died’ a litany of the friends of their eponymous frontman who had passed away, and the ways in which they had shuffled off this mortal coil, and ‘In Memoriam’ is the ‘Game Of Thrones’ version of that song. Except, the list is longer and the ways in which everyone included met their ends are, invariably, far more brutal and horrific. 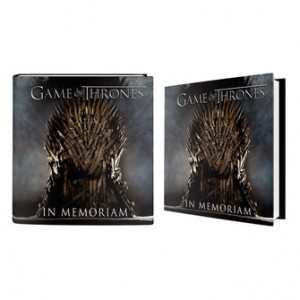 Anyone who’s read George R. R. Martin’s novels or been dragged into the compulsive TV series knows that Westeros is a dangerous place and that it doesn’t matter how rich, popular or powerful you are, or whether you’re a major or minor player, no-one is safe from death’s embrace. And ‘In Memoriam’ remembers them all, each and every person (relative to the plot) who has died in the HBO series is included, along with a brief history of their lives, their allegiance and the manner of their death. Depending on the level of your devotion to the show (and books), ‘In Memorium’ will either by a curiosity (to while away an afternoon with) or will be an invaluable resource as the countdown to the beginning of the fifth series continues its interminable descent to zero. Me? I’m somewhere in the middle, and in the days before the new series starts, I daresay I’ll pore over it a few more times in order to make sure that I my mid is focussed, with crystal clarity, on who is still with us and who isn’t when he credits begin to roll. Oh, and before you ask, the rules stands. If you didn’t actually seem them die, they’re probably not dead, which is why I’d imagine, the “champion’ with the canine designation didn’t make the cut this time around. Who knew that death could be this much fun…? Tim Mass Movement