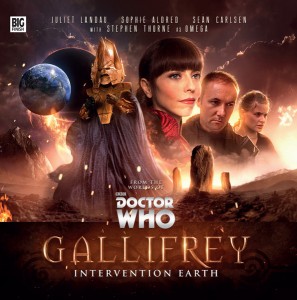 Gallifrey: Intervention Earth – Starring Sean Carlsen, Sophie Aldred, Juliet Landau, Stephen Thorne, Gyles Brandreth, Scott Arthur, Daniel Brocklebank, Laura Doddington, Rachel Atkins, Andrew Pepper & Toby Longworth & Written by Scott Handcock & David Llewelyn – 2xCD / Download (Big Finish Productions)
Having previously resigned myself to the heart rending belief that ‘Series Six’ was the final hurrah for ‘Gallifrey’, I was more than a little shocked and excited to discover that ‘Intervention Earth’ was set to continue the legacy laid down by, previous series. The countdown began and I awaited its arrival with nervous expectation and, strangely, a growing sense of trepidation following the news which reached me first through whispered rumour and later confirmed, that Lalla Ward and Louise Jameson were not going to be in the new release. After all, Romana (the incarnation played by Lalla that is) and Leela were central to the series; but if it could survive the departure of Braxiatel (apart from the versions from alternative realities and universes that kept appearing) then it could also survive the omission of two more of its stalwarts. Couldn’t it? Oh yes, it most definitely could, and it does. Not that they aren’t missed of course, but this is a very different ‘Gallifrey’, one led by a very different Romana (played by Juliet landau, who was first introduced in ‘Series Six’), the pragmatic, emotionally cold and distant president of a world teetering on the brink of crisis.

With Ace (Sophie Aldred) joining the cast to fill the void left by Leela and to provide the necessary irrational and impulsive balance to the often overbearing and guarded nature of the Time Lords, ‘Intervention Earth’ begins at a furious pace. With the discovery that a massive, artificially created singularity is consuming everything (matter, time and space) in its path, Gallifrey finds itself at the centre of a potential galactic crisis that must be prevented if the Time Lords are to guarantee their own survival. Combining the delicious political intrigue and twist heavy plots and characterisation that made the first three series such compulsive listening with the action, excitement and adventure of the last three, ‘Intervention Earth’ ties together a tale of religious fanaticism, betrayal, stone circles, ancient, deadly artefacts, abandonment, sacrifice, the return of one of the Whoniverse’s greatest “villains” and the re-emergence of an unexpected ally (no spoilers!), that throws the “new” characters (Ace and Romana III) into a wonderful new dynamic with ever present Narvin, played by the always excellent Sean Carlsen. ‘Intervention Earth’ is a wonderfully dark and compulsive story performed by an accomplished cast that slide all the pieces for a new series onto the board, inviting everyone to join in what promises to be one hell of interesting game. It’s a new dawn and a new day (on Gallifrey) and its feeling good… Tim Mass Movement