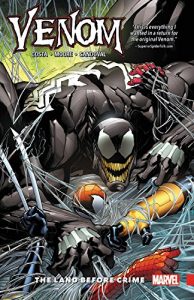 Of all the four colour love stories that have played out in full view of fandom, one of the most endearing and enduring is that of Eddie Brock and the alien symbiote, Venom.  There are a number of reasons for its appealing longevity. Primarily it’s because they found something in each other that they could both relate to, a loathing of the people and society that they saw as anathema that had constantly clawed at them and together they became a merciless, psychotic killing machine whose appeal lay in the fact that they did the kind of things, that deep down inside, each of us had at some point thought of doing to those who we thought, mistakenly or not, had wronged us. And because it’s not a relationship built on the sort of sugary over-sentimentality that’s so sickly it makes you want to vomit. No, their dependency on each other is based on the fact that they “totally get”  each other on a deep, intimate level  and shared psychosis. And now they’re together again.

But experience, time apart and being with, and around, other people has changed both of them and this time instead of unleashing their fury on the world at large, they want to be the kind of heroes who they used to try to eat. However, everything isn’t sunshine and roses in the land of Eddie and Venom, as the former senses that something is wrong with his long-lost love and vows to find him the help that he needs. That kind of help always comes at a cost in the Marvel Universe though and to get it, Eddie has to make a deal with the devil and do something that he’d really rather not. He has to help the kind of corporate entity that he’d rather flee in terror from, screaming louder with each and every step,  get back what they see at being “rightfully” theirs. And the only way to do that is to battle Stegron and an ever growing enclave of dinosaur human hybrids and take it from them by force. Love though, is one heck of a motivational tool and so Venom does what he has to do, and even though things end up going as catastrophically pear shaped as they always do for him / them,  it all sort of works out in tried and trusted anti-hero fashion in the closing moments. Sort of.

Land before Crime weaves the sort of shameless uber-violence that Venom is famous for into a plot that’s built around a timeless love affair and the difficulties that each partner faces in finding their place in it, and their mutual place in the world, after an extended period apart. While each has grown and is looking to be something other than they are, at the end of the day, like the fish and the stories protagonist in Hemingway’s The Old Man and the Sea, Venom has to be Venom, and so the body count doesn’t consist solely of miscreants and moustache twirling villains, and inevitably contains more than its fair share of innocents. But, it’s all about baby steps, because Eddie and Venom, slowly but surely, are making progress toward becoming the person they want to be. Which is nice. And Moore and Sandoval’s art ensures that Costa’s story plays out in graphic, beautifully detailed gory glory and captures every nuance of a tale that finally sees Venom set sail on the journey that he was always destined to take. Eddie and Venom sitting in the tree, K-I-L-L-I-N-G…  Tim Cundle