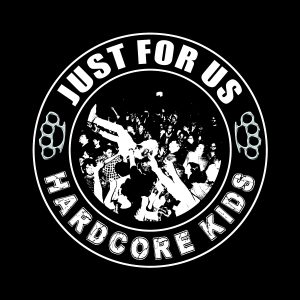 Two Hardcore compilation records, Where the Wild Things Are and New York Hardcore: The Way It Is changed my life forever, and so whenever a HC comp drops, I get goose bumps and a shiver of anticipation runs down my spine. Because I know how important these records are, what they can do and how much they mean to the bands on them, the labels who put them out and the folks, me included, who listen to them. While I’m too old, set in my ways and too far down my own path for any record to change my life again, if I was twenty five years younger, there’s a good chance that Just For Us Hardcore Kids would have the same kind of impact on me as those Blackout and Revelation releases did.

Packed with all kinds of HC goodness and tough as nails heavy hitters, this is the kind of record that I’ll spin over and over again; and thanks to a lifetime of devotion to the scene, I’ll almost certainly end up tracking records, bandcamps and soundclouds (or whatever the fuck it is bands do these days) by every band on here down. And while it’s nigh on impossible to single any of these cats out, the first acts I’m going to actively pursue (apart from Truth and Rights, because I’ve got those dudes on permanent rotation on my playlist) are Huge and their Bruisers meets Murphy’s Law tuneage, Strong who could have been on the bill of any late eighties CBGB’s Sunday matinee, Despairadisio who seamlessly fuse the best of Warzone and the Gorilla Biscuits to create something new and Dead Blow Hammer who for some reason make me think of Tommy Christ fronting The Burnt. But believe me, I’m also get around to checking out Crossface, Full Scale Riot, Onpoint and every other band on Just For Us Hardcore Kids out as well because each and every one of them has made this miserable, jaded, middle aged Hardcore kid think that the future of the scene is not only in good hands, but that it’s also looking pretty darn good.  You don’t want this record, you NEED it… Tim Cundle