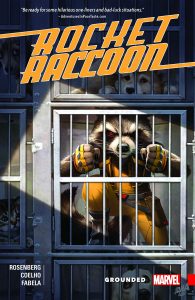 When a band breaks up due to internal conflict and “creative differences”, it’s never easy for any of the members to embark on a solo career. They’re used to doing things a certain way and to having their comrades in arms be there to back them up and help them through every sticky situation. But most of all they’re used to being part of a collective, a family that works, fights, sleeps and shares everything together, and when that cohesion disappears, trying to pick yourself up, dust yourself off and get back on track is a lot easier said than done. Especially if you’re stranded on,  and with almost no way of,f a planet that you really, really dislike; which Rocket is in Grounded.  Having no ship and no team thanks to the closing moments and events of Civil War II, he’s on his own and left to scour New York for some way, no matter how desperate, to get off Earth and back to the stars. Of course, being the sociable, gregarious chap who doesn’t stand out in a crowd that he is, it isn’t long before Rocket finds himself the subject of a city wide, uh “man” hunt by the NYPD who thanks to his helpful, outgoing nature have been made aware of his presence.  Rescued by an unlikely ally who  understands the dilemma Rocket’s facing thanks to also being forced to go solo when his group split up, the former Guardian is soon back on the trail of the last coach out of Dodge. It’s a quest that ultimately results in the hunter becoming the hunted when he advertently stumbles across a xenophobic conspiracy to control immigration in a cash for access, unbelievably violent, let the lead fly and everybody die, highly illegal scheme. Rocket’s “fame” precedes him though, and before he can say “Blam, I just murdered you”, he’s in the sights of the aforementioned privately owned operation’s big kahuna, and following a city wide game of carnage and destruction filled cat and mouse Rocket ultimately shows his true heroic colours and does what any self-respecting ex-member of the Guardians of the Galaxy would do. He saves the day*.

You know that you’re on to a good thing when you’re grinning hard enough to make your face hurt by the end of the first page, trying to suppress your giggles by the end of the third and cackling like one of the three ladies who open Macbeth by the end of the fifth. Matthew Rosenberg’s fish out of water, Stranger in a Strange Land flavoured, funny, bruising, gung-ho, character led tale of a misanthropic mammal trying to make his way in, and off, the world is one of those books that you know you’re going to enjoy before you start it ((a) Because it’s Rocket and (b) Come on, who doesn’t love Rocket Raccoon. Or the Guardians of the Galaxy. Exactly. No-one that’s who) and believe me, you’ll enjoy it a lot. After all it’s got everything you could ever want, a great story, fantastic characterisation, laugh out loud dialogue and stunning, detail heavy artwork courtesy of Jorge Coelho. What’s not to like? It’s the whole enchilada with extra jalapenos served with an ice cold bottle of Victory Golden Monkey.  And folks, it doesn’t get much better than that…  Tim Cundle

*It’s not a spoiler okay? Look, the book has his name on it, it’s all about him and there’s no way that Marvel are about to kill off Rocket Racoon anytime soon. Not going to happen. So if he doesn’t die, he must be successful in whatever endeavour he engages in.  Ergo, it’s not a spoiler.