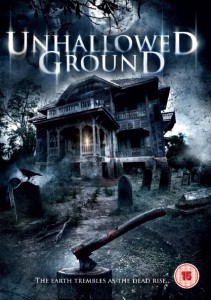 Unhallowed Ground ( Kaleidoscope)
There were high hopes as this disc was inserted into the player, as ‘Unhallowed Ground’ has apparently been well received on the festival circuit, but sadly it’s something of a damp squib, promising much and delivering relatively little. The hackneyed plot involves a group of six teen cadets (three boys and three girls, so some clumsy sexual tension can be dialled in), who have one final exercise to do before graduation, defending their school building, now deserted as term has finished, against an imaginary foe… what they don’t realise is that two inept burglars have targeted the school vault to rob that very night. ‘That very night’ is also coincidentally the three hundredth anniversary of some ritual suicide malarkey that was used to strike a deal with Satan and save the school from the plague. Cue an ancient evil force getting all arsey on its birthday. So far, so average, but this could have still been a fun little thriller, claustrophobic and action packed, if only the characters weren’t so clichéd and utterly dislikeable, the acting so wooden, and the (glowing eyes!) effects so poor. It’s all about as scary as an episode of Doctor Who… Probably less so actually… And the overall feel is definitely of a hammy TV drama. The final twist does raise a few eyebrows, but the antagonists are so unconvincing, you couldn’t care less who makes it out alive by then. Preferably no one! Ian Glasper