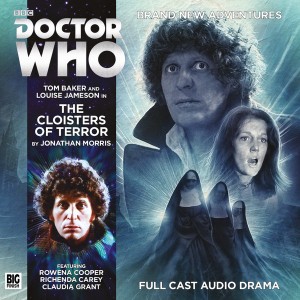 Doctor Who: The Cloisters of Terror – Performed by Tom Baker, Louise Jameson, Richenda Carey, Rowena Cooper, Claudia Grant, Allison McKenzie & Jane Slavin & Written by Jonathan Morris – CD / Download (Big Finish)
Halfway through ‘The Cloisters of Terror’, I could have sworn that it was 1977 again; as the Holmes (that’s Robert, not Sherlock) inspired classic story finds The Doctor and Leela, after intercepting a call to the Police about a missing student, in St Matilda’s, the only Oxford College that also operates as a convent. That’s right boys and girls, a convent, and who among us isn’t scared of Nuns? Oh, right, so it’s just me then is it? I see. Anyway, back to ‘The Cloisters of Terror’ (see, the clue is in the title, I told you nuns were terrifying), in which young girls are mysteriously vanishing, their disappearances heralded by the appearance of three ghostly spectres, apparitions that only the victims can see. Stumbling into the case (and an old acquaintance) in the wake of the latest girl going missing, The Doctor and Leela soon uncover a dark secret dating back a thousand years, a secret involving spirits, sacrifice, death, the end of the world and a conspiracy of silence that’s kept it all hidden since the convent, and later college, was founded. Plunging headlong into the paranormal events, The Doctor soon discovers that appearances can be deceptive and the truth is far more deadly and much less spectral than first imagined, as he fights to save not only the missing girl and St Matilda’s, but the Earth as well. It’s jolly exciting stuff, and as I said previously, ‘The Cloisters of Terror’ filled me with an urge to cover my eyes and bury my head underneath a cushion, my imagination only letting me ‘peek’ at proceedings when it thought it was safe to do so. It was just like 1977 all over again, except this time I know better;  as I know that nothing, and no-one, is ever really safe around The Doctor.

Part ghost story and part science fiction based thriller, ‘The Cloisters of Terror’ feels almost exactly like a Robert Holmes serial, the tone and pace are almost in perfect synchronicity and it’s to Jonathan Morris’ eternal credit that he’s managed to capture that in this frantic and hugely enjoyable, although somewhat predictable, drama. Okay, so you can see the twists coming and you know how the whole thing is going to unfold before it does, but the dialogue, pacing and performances pull you into the story, and even though you’ve already guessed what’s going on and what’s about to happen, they keep you frozen in a state of nervous expectation and joy as events play out. It’s a classic story featuring a classic Doctor. What more could you want…? Tim Mass Movement