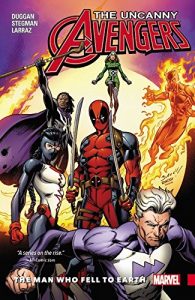 There are moments in history, both real and fictional, that change the way you, in the former, and the participating players, in the latter, view the world. Standoff was one of those moments in the Marvel Universe as it not only confirmed all of the suspicions that a lot of the good guys (and the bad guys) harboured about S.H.I.E.L.D. but it also made it crystal clear that no matter how bad they thought the law enforcement agency was, in actuality the clandestine lengths it was prepared to go to and morally questionable depths it was happy to sink to in order to achieve its objectives were beyond the wildest imaginations of even the loopiest of costumed crusaders. You know, the sort of conspiracy obsessed, single minded do-gooder who’ll eventually melt down and end up sharing a beach front condo in New Jersey with Deadpool. And it’s that event, in which writer and artist work in perfect communion, the aforementioned Standoff that opens this latest chapter in the Uncanny Avengers, detailing how they learned of Pleasant Hill’s existence, how they ended up becoming residents of the secret super villain (and hero) prison and how they eventually began the fight to end its existence, and usage, once and for all.

Then we get to the real heart of this terrific tale, as the age old debate about the relevance and meaning of death in the four colour domain is given a fresh perspective when Hank Pym, supposedly now conjoined with his mortal enemy and biggest regret, Ultron, returns from beyond the grave and the final frontier. Given his new state of existence, even those closest to him are sceptical about his miraculous resurrection and set out to prove that creator and monster are not one and the same, which fuels the rather splendid twisting and turning plot and gives rise to all manner of Frankenstein themed questions and ideas about the nature of life and the value placed on artificial sentience. That’s right folks, Gerry Dugan’s story is not only a tried, trusted and true tale of super-heroics that’s given shape and form by the artistic maestro Pepe Larraz, but it also ponders the previous notions while exploring the differences between organic and machine intelligence and personalities and the emotional gulfs that ultimately separate and divide them.  It’s hard science fiction in its purest form, hidden in plain sight in an energetic, action heavy and incredibly enjoyable Avengers story. Hank Pym and Ultron… Assemble!  Tim Cundle